Recently, a new trend has emerged among college students interested in health and wellness: nutrition shakes and energy teas. There are now several of these shops around Gainesville. One spot in particular is about to celebrate its first anniversary — Up 2 U Nutrition.

Located at 1517 NW 23rd Ave, which is about five minutes from UF’s campus, Up 2 U Nutrition is a local hotspot. Immediately upon walking in, guests are greeted and offered the friendly sentiment “welcome home.” The atmosphere is one of positivity and comfort; the space is filled with bright-colored wall murals and motivational quotes. The owners, young couple Nicolas Echavarria and Rosie Gil, have even added their own personal touches to the shop’s decor: There is an aesthetic wall of themed mugs, from Harry Potter to Star Wars, for dine-in customers. 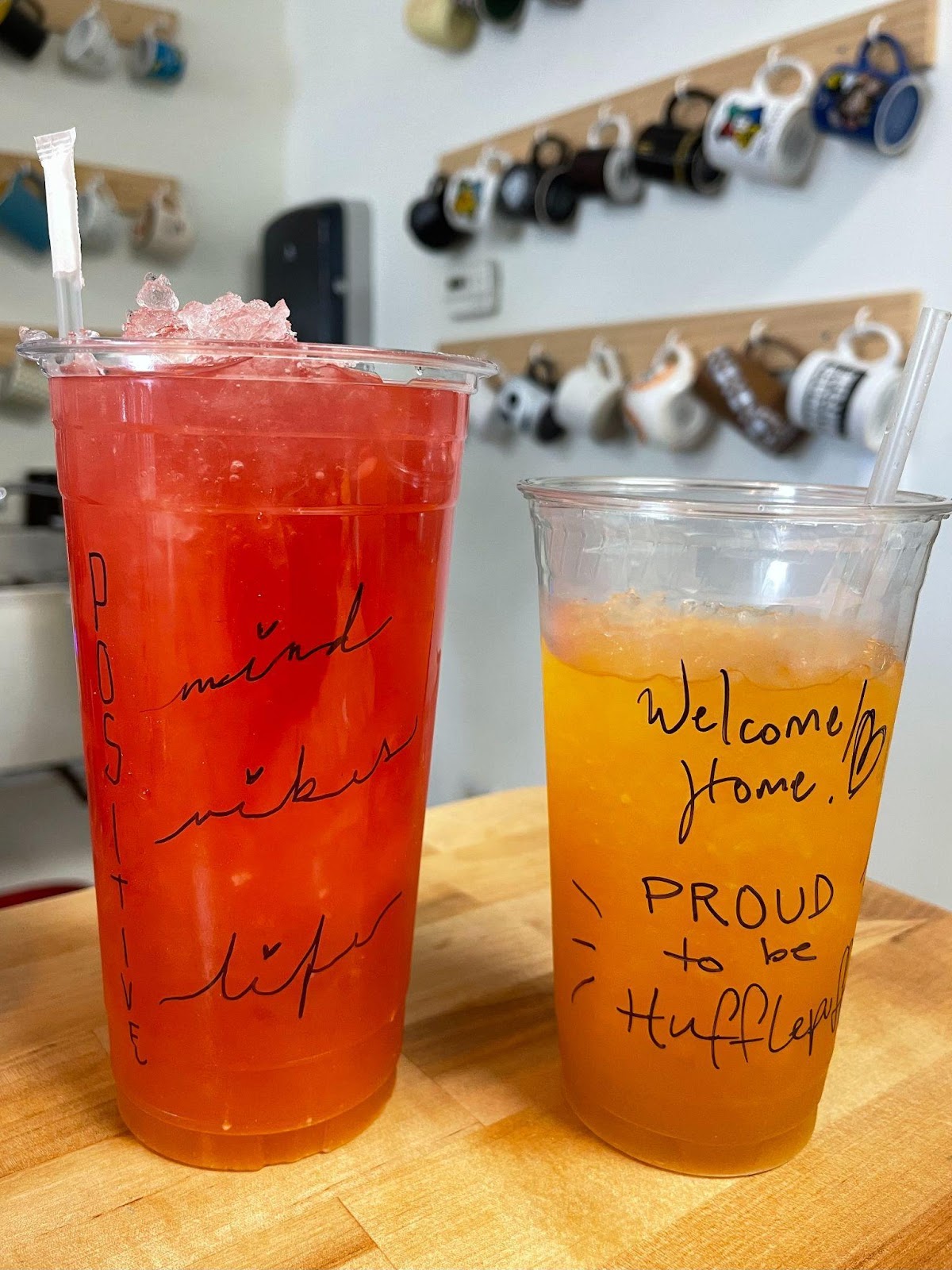 Echavarria and Gil also offer themed tea flavors, furthering their philosophies of authenticity and wholehearted fun. The energy teas are available as “Specialteas” or “Insaniteas,” the latter having added protein in addition to the vitamins and antioxidants in both. Some flavors include “Captain America,” “Hulk,” “Bad & Boujee,” “Goblet of Fire,” and “Polyjuice Potion.” There are also flavors dedicated to each of the four Hogwarts Houses. Each tea is an herbal blend made with vitamin B-12, vitamin C, aloe vera on a concentrated source, sugar-free flavors and according to Nicolas, a whole lot of love.

The shakes are considered a full meal, consisting of 21 different vitamins and 25 grams of protein. This healthy alternative is low on the sugar side, completely water-based and thus dairy-free, uses a plant-based protein and is only 200 calories. Just like the teas, there is a select menu of “Supah Shakes” with fun flavor combinations, like “Oreo Explosion,” “Caramel Frappe,” and “Captain Crunch.”

While their product is both — miraculously — healthy and delicious, Echavarria and Gil did not talk much about this when asked what makes their shop special. Rather, Gil said they “want to make everyone feel loved and welcome,” and want people to come to Up 2 U Nutrition to “forget about their issues and just be themselves.” Gil said she fell in love with the business after seeing other shops run with this level of sincerity.

Though they eventually bonded over their mutual love for the business, Gil and Echavarria shared very different origin stories.

Gil admitted she’d previously thought the whole thing to be a scam. It was only when she tried the products herself and reaped the immediate health benefits that she changed her own mind. She had worked in a restaurant prior and had struggled to manage her health engulfed in that environment. Rosie wanted to be able to work for her own dreams, which, at the time, involved her health and her family. She thought about the reality of having a family while running a business. She also kept in mind her goal to help her parents retire, who have only been living in America for five years now. With all of this taken into consideration, Rosie found her home in Up 2 U Nutrition. 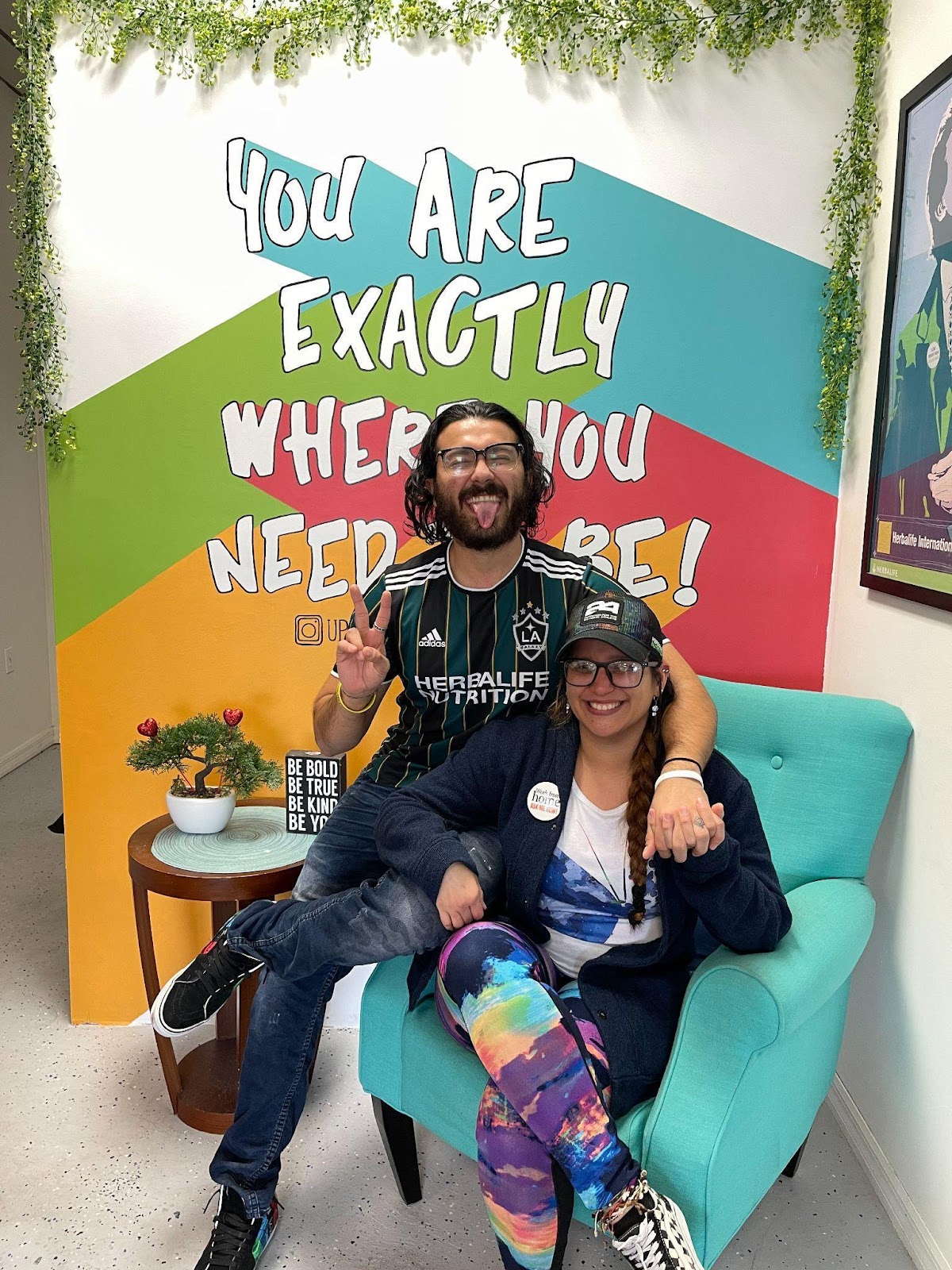 As for Echavarria, his story is quite different. His family has been in the nutrition business for 15 years. At first, he had no interest in taking it on for himself. This all changed at 13, when he’d been in need of a major life change and used the products to better his health. Then, sometime later, he was asked to count the money for his parent’s shop to help out. This, coupled with the undeniable health benefits, made him give the nutrition business a second chance. He opened his own store at 18. Throughout the years, Nicolas has grown to love his work and the community that surrounds it.

Echavarria and Gil hadn’t planned on opening a shop in Gainesville.

“It was a total accident,” Gil said. “We decided to move out of Miami, looking for something more calm, like Tennessee or Georgia. We passed through Gainesville, saw the city and decided to give it a try.”

Both agree the vibe of the people here in Gainesville versus Miami is very different. They raved about how nice people are here and how refreshing it is to hear strangers say “hello” every day.

The two have big plans in store for Up 2 U Nutrition. To celebrate its first anniversary, they are having a ribbon cutting ceremony at 4:30 p.m. on Feb. 22. They are also giving out samples and promotional raffles.

They are looking to set up a loyalty program for consistent customers. Gil emphasized they want to be seen as a family place and want for everyone to feel at home there.

Up 2 U is the place to be. Join Echavarria and Girl in celebrating on Feb. 22.

Dayna Maloney is a third-year advertising major at the University of Florida. As an avid reader and writer, Dayna has an undying passion for storytelling. She thrives in any creative setting with a love for books, music, photography, film, and art. Dayna believes in spreading love and inspiring others to be their best and fullest selves.
Similar Reads👯‍♀️

Work
How To Make a Resume Stand Out
Read more →

Work
Why It’s Okay to Justify the $7 Latte: the Importance of Breaking Routines as College Students to Avoid Burnout
Read more →

Life
5 Ways to Get More Involved in Your College Town
Read more →
Good stuff only!