The Gossip Girl Reboot: The Hits and Misses

The infamous teen drama about the scandalous lives of Manhattan’s elite that we all know and love, Gossip Girl came out with a brand new season this summer. The Reboot was produced by HBO Max and co-created by the original creators of the show. After the mid-season finale, Gossip Girl has been the center of a lot of cultural commentary and criticism. What worked? What didn’t? What could the show have done better? What can we expect in November when the rest of the season airs?

The show is set in the same high schools as the parent show, Constance Billard and St. Jude’s ten years after the original scandalous teens graduated. It follows the lives of half-sisters, Zoya Lott, and Julien Calloway. Zoya is not as wealthy as the rest of the friend group and has recently moved to Manhattan.

The show is supposed to reflect how social media and the recent developments of the past ten years have affected the lives of teens and naturally, Julien, the reigning It Girl of the school is an Instagram influencer and a runway model. The rest of their friend group are Julien’s social media managers and loyal sycophants – Luna and Monet, Obie – Julien’s boyfriend, Max Wolfe – the promiscuous, more sexually fluid, obvious Chuck Bass reincarnation, Aki – the pink-haired bisexual skater heartthrob, and Audrey – Aki’s girlfriend who may or may not be interested in Max.

Now that we know who the show is about, does the plot of the reboot live up to the glory of the original show, and does it fare as a standalone production?

As far as costume design goes, the fashion for the reboot was put together by the designer who did the costumes for the original, Eric Daman. With so many of the recent reboots failing miserably in the fashion department, we were very skeptical of the reboot’s fashion, but Eric was able to do an admirable job incorporating current trends and high fashion into the looks while still managing to give each of the characters their own personal style. In the first episode of the show, there is a massive Christopher John Rogers fashion show, which seemed to be very strategic marketing for the fashion house, and one of the protagonists, Julien also closes the show in this extravagant black and white piece from the Fall 2021 collection.

What particularly stood out to me was the uniforms, and how each character has their own spin on the classic Constance Billard and St. Jude ensemble. Each character has their own moment to shine, fashion-wise at least, and all their outfits correspond to their personalities and characteristics very well. Julien dresses in a very Instagram- Streetstyle way which makes sense for her as an influencer, Luna has a very feminine and flowy style, Monet dresses very preppily, drawing inspiration from Cher’s Clueless, and Audrey has a very old Hollywood glamourous look about her. Max Wolfe is often seen in very Harry Styles-esque suits which makes sense for his personality, while Zoya carries a lot of tote bags that have political messages on them, owing to her strong political standings. 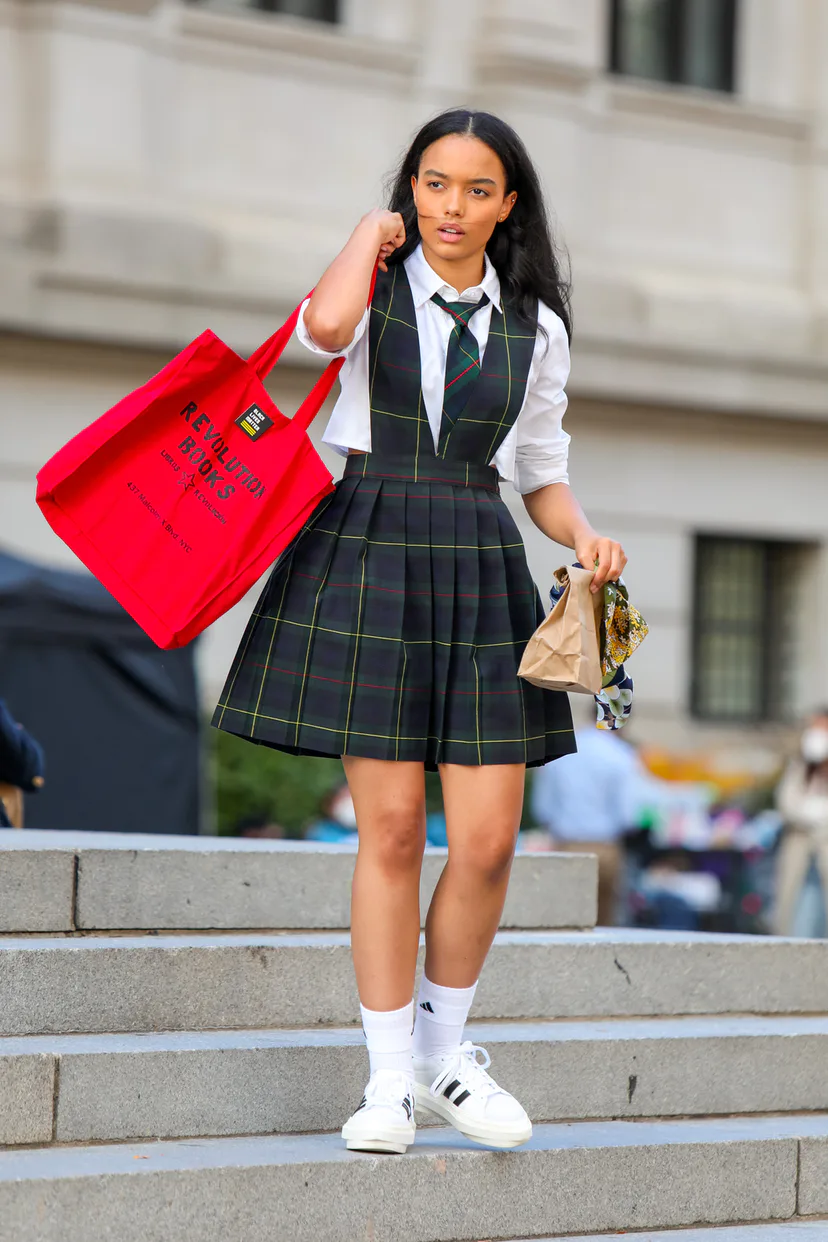 Zoya Lott and her Tote Bags 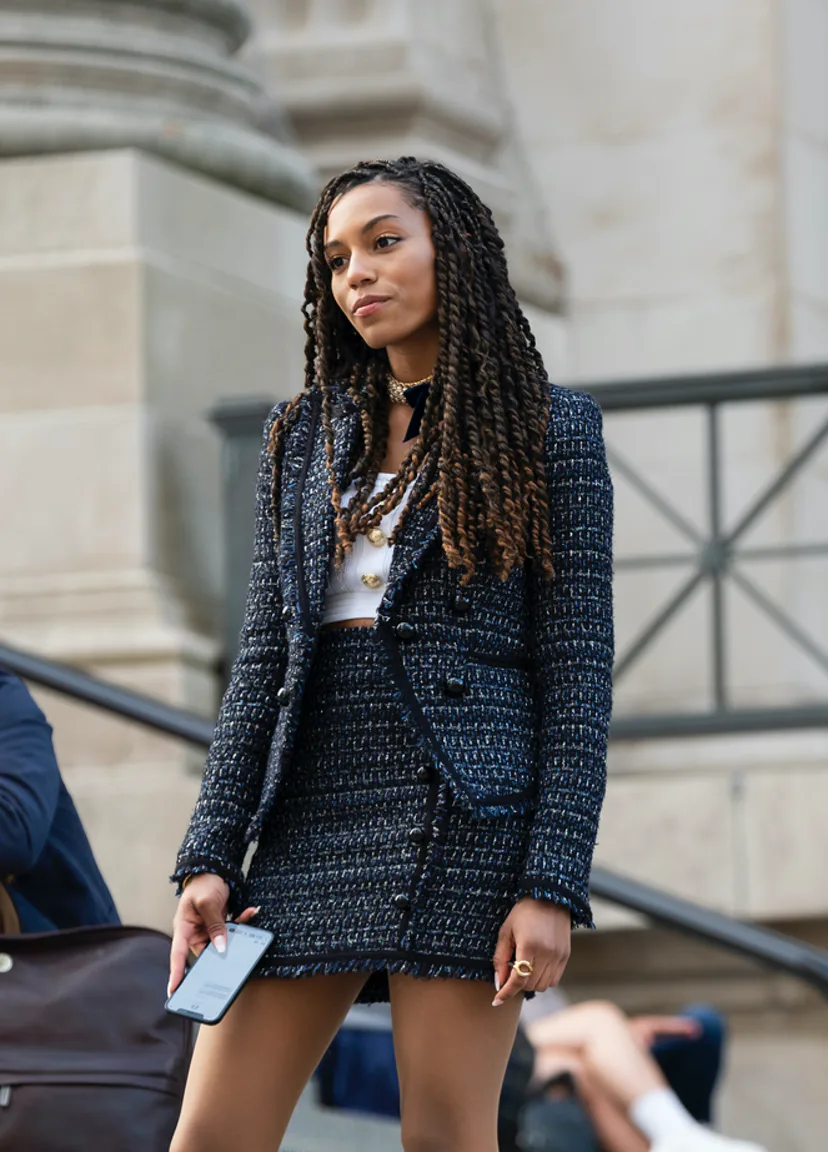 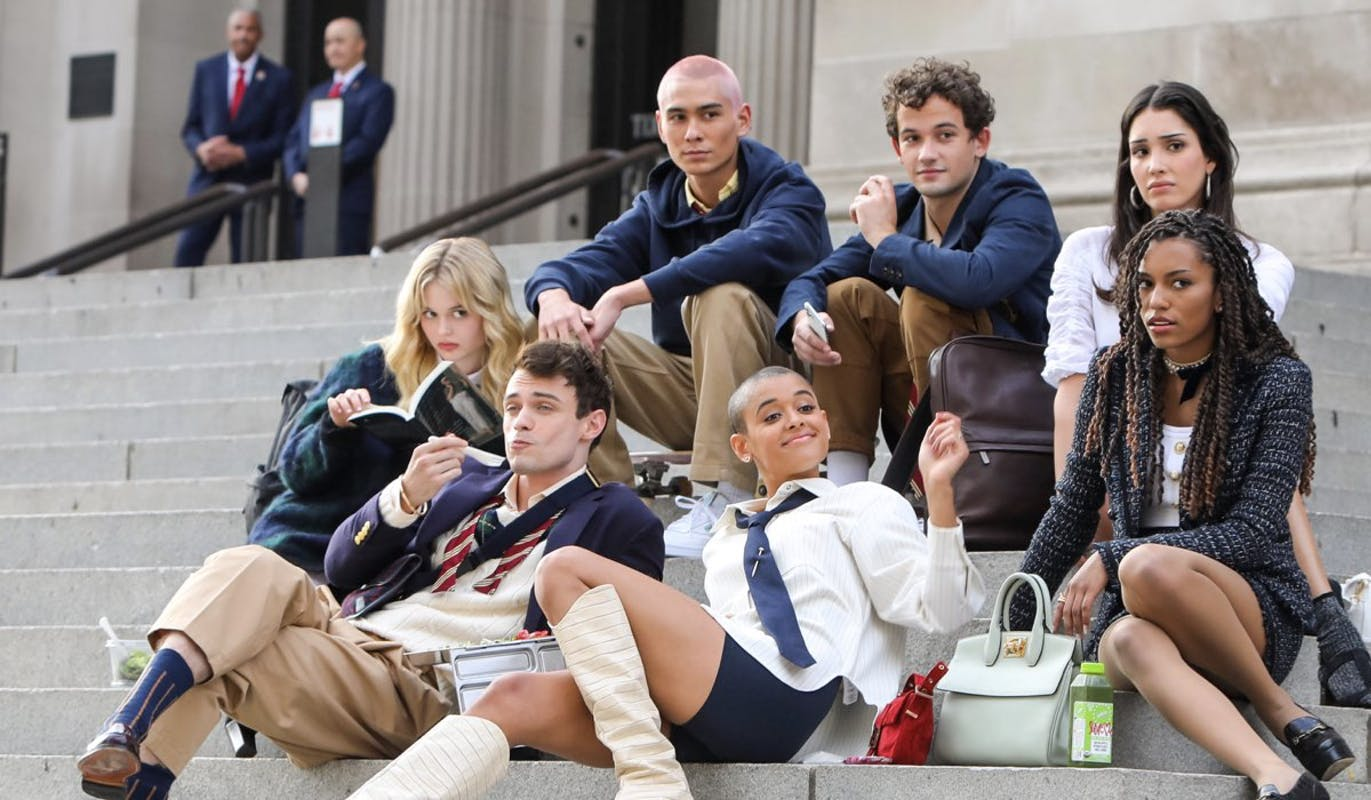 Speaking of politics, one of the places where the original and the reboot differ is the incorporation of politics into the reboot and the lack thereof in the original. While the greater diversity and political statements made on the show did not seem forced and were woven very well into the plot of the season so far, the reboot did attempt to make the students more aware of their class privilege, and this direction may not have been the best to take for a multitude of reasons. One of the central themes of the show is the class divide between Zoya Lott and her richer counterparts.

Obie, one of the richer students seems to be hyper-aware of his privilege, going to different protests, quoting Marx, he seems to be the embodiment of rich white guilt. Zoya, on the other hand, who is supposed to be significantly poorer than the rest of the students, lives in a rent-controlled Manhattan brownstone with her father, a successful lawyer? Being the “poorer” of the lot, she often calls Obie out on his “performative activism” and his “overcompensating wokeness”. Shows like Elite which may have their own shortcomings have managed to capture the intricacies and nuances of this major class divide between the scholarship kids and the rich kids much better than what Gossip Girl attempted to do.

Part of what made the original show work was how campy and out-of-touch the students were with the rest of the world. Well, they may not exactly have been the greatest human beings, but they made for great entertainment. We aren’t saying that making the students aware of their privilege will make the show any less entertaining, but all we’re saying is that making them aware of their privilege isn’t exactly any more class-conscious than the original one. It’s still not realistic, it’s still not attainable, it’s still a bunch of rich kids wearing high fashion and partying on the Upper East Side.

“Unlike Chuck Bass, the “Gossip Girl” crew of 2021 is aware of income inequality. They take Ubers, not limos. They’re (mostly) not rude to service workers. And Zoya Lott, played by Whitney Peak — the new iteration of the grounded, middle class, fish-out-of-water Dan Humphrey — is a scholarship student at the upscale Constance Billard school, the implications of which will be explored in nearly every episode”, these sentences almost make a mockery of the class divide that exists in schools, implying that the students taking Ubers and being not rude to service workers makes them better people, setting the bar extremely low.

The question that must be at the back of all our minds is “Who is the next Gossip Girl?”, and the answer to that is quite possibly the most bizarre part of the plot. “Gossip Girl” is an anonymous Instagram account started by the teachers of the school to spy on their students and get revenge on them for their ignorant behavior. It is extremely confusing why these teachers would go to such lengths to fight with teenagers, constantly spy on minors, take pictures of them in compromised circumstances and try to cause havoc in their lives. It is absurd how these teachers hardly have lessons to plan or papers to grade. After the original Gossip Girl’s underwhelming reveal, the reboot seems to have disappointed in this department too.

Putting these issues aside, we still think the show is written well, the characters are interesting, the plots are compelling and it makes for a very fun watch. Without the nostalgia component, it is unclear whether this show will survive as a standalone production, but if you enjoy the melodrama of the rich, fashion and very attractive cast members, then the Gossip Girl reboot is for you!

Nivedita is a second-year student at Krea University pursuing a major in Psychology and a minor in Social Studies. She loves all things Pop Culture and is very interested in Musical Theatre, Fashion, and Television!
Similar Reads👯‍♀️

Entertainment
He’s All That: The Remake We Got But Didn’t Really Need
Read more →

Culture
Are You Toxic?
Read more →
Good stuff only!