Getting Back on the Hockey Grind

One of the hardest things I have ever had to do is take a break from hockey. I started playing hockey during my junior year of high school. I knew how to ice skate since I was little, but only on figure skates. Early into my junior year, I experienced my first break-up, and, as a result, I reached a very low point in my life. I became depressed, to the point that I was unmotivated in many aspects of my life. I started to eat, exercise, and study less, and simple mundane tasks such as getting out of bed in the morning became extremely difficult for me.

A friend of mine suggested that I try hockey since I loved to skate. I also wanted to find a winter sport, since I had track and field in the spring, and played soccer throughout the summer and into fall. Despite my low spirits I decided to give it a try, and I am so grateful that I did. I found a love for the sport in a way I did not have for track or soccer. I had something to look forward to every week since we practiced twice a week, and when we had games on the weekend, it got me out of the house and moving. It also became a great way for me to manage my anxiety. Every thought I had left my mind as soon as I hit the ice since I only had time to focus on the drills we were running through.

When I began looking at colleges, I knew I wanted to go somewhere that had club hockey. I was not qualified to play for a division team, so I looked at each school’s list of club sports for the one I love. As soon as I stepped foot on Oswego’s campus, I knew it was the perfect fit for me. I was sold when I saw the rink in the center of campus.

I joined the Women’s Club Ice Hockey team my first semester at Oswego, as a Freshman. The team was very welcoming and helpful, and my teammates all made me feel like I belonged and gave me tips on how to improve. Despite this, I still could not help but notice how much worse I was than them. I would always be the last one during sprints, sent bad passes, and fumbled over the puck. I felt as though I was letting the team down during games because of my lack of skill and experience.

Along with these insecurities, I was also dealing with the transition to living at college. I was now four hours away from home, with much higher expectations regarding my work, and many opportunities now available to me. I had little trouble being away from home, but I made the mistake of taking on too many responsibilities at once. I was unable to narrow down what clubs I wanted to be involved in and attending all of the different meetings for them, along with the late practices, made it difficult for me to get all of my work done.

My anxiety became out of control. After every game and even some practices, I was destroying myself. I focused on every single thing that I did wrong and let those thoughts manifest into a downward spiral, one that I was soon going to constantly become trapped in. This made me begin to dread going to hockey, something I once looked forward to. I no longer was having fun, but rather, convincing myself that I was a failure and that I would never improve.

I did not want to admit it, let alone do it, but I knew what I had to do: I had to stop playing. Hopefully not forever, but at least for the rest of that semester, I had to stop playing. I texted both my captain and my coach, explaining the situation and my need for a break, all while sobbing. I later had to tell my teammates, my friends, and my parents, thus reliving that heartbreaking moment several times.

Although it was one of the hardest things I have had to do, I know it was necessary for my mental health. Today, I am so proud of myself for taking that step, and the many that followed after. I am also grateful to have had such understanding and supportive friends and teammates that understood how important that decision was for my mental health. My captain and coach made it clear that whenever I felt ready to come back to the team, I was more than welcome. When I began to consider therapy, one of my teammates suggested a counselor on campus that she and other people she knew had seen.

After I decided to take a break from hockey, the next semester I began to go to counseling services on campus. I began to get a better handle on my anxiety, learning how to stop negative thoughts and redirect them into more positive ones. I noticed myself worrying and overthinking less and began to keep an anxiety journal to help rationalize my thoughts. By the end of the semester, I noticed a significant difference not only in my anxious mindset but in my mood as well, so much so that my friends began to notice it as well.

Over the summer I decided that I was ready to play again. I wanted so desperately to return to the sport I loved, but at the same time, I was nervous. What if I began to revert back to my old mindset, destroying my self-confidence and calling myself a failure? What if my anxiety began to become worse, worse than my first semester and so bad that it would become out of my control?

As this semester began approaching, I made another tough decision, one that scared me: I reached out to my teammate and told her that I wanted to play again. As soon as she replied (an enthusiastic reply expressing her excitement that I was returning, nonetheless), I cried again. This time, it was out of pure happiness. I knew I was ready to play again because I was no longer dreading practices but looking forward to them again. When the season began, my coach and team expressed how they were trying to have a more encouraging and optimistic atmosphere this year, and they have more than achieved it so far. During practices I have not felt self-conscious of my skill level, and the other girls have helped me numerous times with advice and encouragement. I am grateful to them for helping me restore my confidence and making me excited to play and improve again. The overall vibe of the team has helped me be able to maintain a positive attitude, as well as gain back a healthy outlet for my anxiety.

Allyson is currently pursuing a Bachelor's degree at SUNY Oswego, and is a double major in English and Broadcasting with a minor in Spanish. She is the CC of her college's chapter of Her Campus, as well as the Secretary of the Women's Club Ice Hockey team. She hopes to one day become an author of fiction novels and collections of poetry. When she is not writing or on the ice she enjoys spending her time reading, hiking, and watching anime.
Similar Reads👯‍♀️ 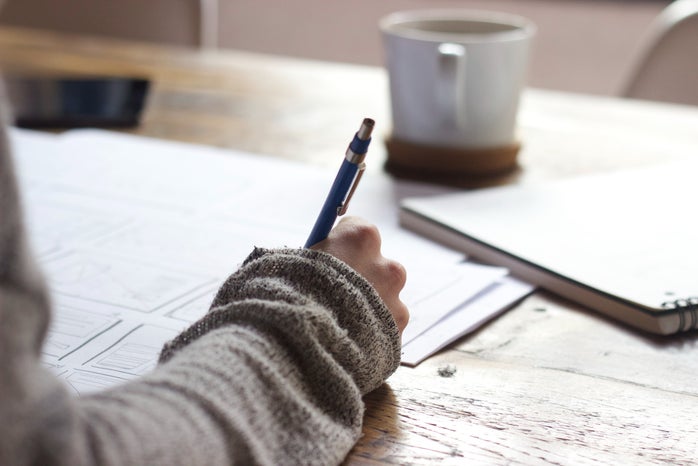