Not Your Typical Weight-Loss Journey

After puberty, I think most people, especially girls, go through a time in which their bodies morph into something they don’t recognize at all. This sounds a lot like the words that I’m sure came out of every Health teacher’s mouth in middle school and high school, but it’s absolutely true. Nobody looks like a little girl forever. Eventually, we all must mature, both mentally and physically. While this process can be less painful for some than for others (I’m looking at you, girls in my high school who suddenly looked like perfectly proportioned supermodels overnight - not that I’m jealous or anything, seriously, kudos), some of us do have a very difficult time adjusting to a new reality.

Around the time my own “change” happened, I also transitioned from being a competitive swimmer, training six days a week and burning every possible calorie I could have even dreamt of taking in, to giving up my swimming career in favor of having more time to just be a high school student and focus on school work. I still exercised - I was on the school tennis team - but the level of intensity was nowhere close to what I had experienced with swimming. This led to a drastic and rapid change in the way I looked. I went from a tiny, skinny little girl of no more than ninety pounds (which, I now realize, was unhealthy for a girl of my height at the age of 13) to a much fuller figure, very quickly. This was mostly because I never changed my eating habits; I was still eating like a person who was training at a high intensity for 2 hours a night, rather than a person whose exercise intensity had just been cut in half and frequency has been reduced by a fraction. Having always been an athlete, I had difficulty changing those habits and, unfortunately, they followed me through high school.  I was left feeling insecure and unhappy with myself, unused to the body I inhabited and convinced of its unworthiness of admiration as a result of being surrounded by the insistence than an “ideal” body is stick-thin or has curves only in the “right” places.  Toward the end of my senior year of high school, approaching prom, I decided that I wanted to make a change once and for all. I began to eat a diet that was healthier in both portion size and content, and I exercised in earnest. Before I began my freshman year at Stony Brook, to my delight, I had lost over 30 pounds. I was genuinely thrilled, and since it had happened over just one summer, I was surprised by my appearance all over again every time I looked in a mirror. I thought that this would be the solution to all of my insecurities and that I would never again have to feel visually inadequate because I had reached a point where I was, once again, “skinny enough.”

But here is what I am writing to tell you:

Weight loss, while it can be excellent for improving one’s health and self-image, does not solve everything.

Once I grew accustomed to the way I looked and continued to carefully maintain my weight, I began to find new things about myself that, if I had my way, I would change. I began to criticize other things about myself, wishing my curves were distributed slightly differently, wishing my nose was a bit more straight, and wishing my hair was glossy and shiny rather than frizzy and wavy. I fell back into my old patterns of self-criticism and was no longer pleasantly surprised when I looked in the mirror. Instead, I recognized the old feelings of disdain toward my appearance that I felt when it was my weight of which I was not fond.

I am not here to discourage anyone from losing weight. If that’s what you want to do, I am fully, 100% behind you all the way and I hope it is as enjoyable a challenge for you as it was for me. I am simply here to tell you that until you begin to appreciate the things about yourself that make you, you, simply losing 5, 10, or even 20 pounds is not going to magically solve issues of self-esteem.

My own tiny body-image triumph only happened very recently. I was lamenting to my sister about my jealousy over her height (she’s 2 inches taller than me and it drives me crazy) when she stopped me to say that she had always been envious of my smaller frame and ability to wear higher heels. Being my argumentative self, I continued to insist that I preferred her blonde hair over my brunette, and her thinner frame over my curvier one, and her tiny nose over my more pronounced one - until she told me that she felt the opposite way about all of those things. She would prefer to be a brunette with thicker hair, have more curves, and would trade her nose for mine “any day of the week.” This shocked me; someone with all of these qualities I dreamt of did not appreciate them one bit. But isn’t that true for all of us? Don’t we all envy the luck of others and deny our own hallmarks of beauty? Don’t we all grow used to what we see in the mirror and lose interest as a result? We recognize and covet the beauty in others, seeing the best in them, while abjectly ignoring it in ourselves, becoming jaded and unhappy with qualities that, in others, we would admire.

Nobody is entirely satisfied with his or her appearance. There will always be something to criticize, and, while this may sound like an unpleasant thought, I think that it is a rather beautiful one.  Not one of us is perfect in his or her own eyes, and so we must all remember to be kind to one another and to build each other up rather than tearing each other down. Remind your best friend today that she is beautiful; do the same for your mother and your sister, because you never know how much they may need to hear it. And, most of all, remember that it is not your weight that defines whether you should be happy with yourself or not - it is the kindness you spread to the other beautiful people in your life. 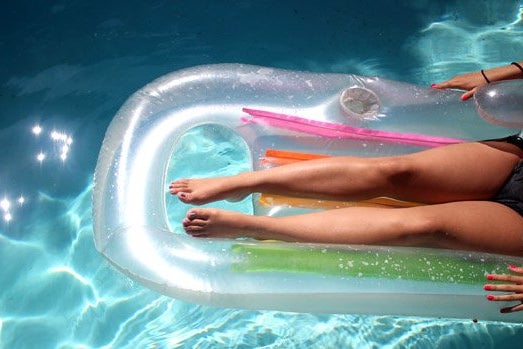