I’ve Been a Gatekeeper of these Books for Long Enough

It seems as if Dune has been all the rage since its second movie debut. I know we’ve all seen the TikToks of people frantically trying to read Dune within a day but usually end up failing. I read Dune a little over a year ago, right before they announced the reboot of the film. It was one of the most difficult reads that I have ever tried to conquer. The first few chapters are filled with information about the political system of Dune, who the characters are, what the customs are, and the history behind Dune. The explanation of other planets’ political tensions includes words like “gom jabbar” and “mentats” – Herbert actually created an entire glossary for the book which I found myself constantly flipping to but I couldn’t seem to grasp the phrases until later on. From page one, you dive right into the story with no time wasted. Besides Zendaya and Timothee Chalamet starring in the new movie (along with a killer cast), personally, I found the book became one of my favorites as I read through it. Herbert spent almost five years just developing the ecosystem of the planet Dune – not to mention the rest of the planets’ ecosystems. It’s an incredibly complex story, one that can be easily compared to our own society where similarities are seen. Herbert got the idea for Dune as climate change gained speed even during the time of the book’s publishing. In the book, the elite communities prioritize the gain of resources and materials as a way to have total control over other planets – no matter the toll it may have on the environment, the local communities, or the lives that are lost during the extraction of these resources. There is also a race of people that has been outcasted due to their eyes and skin tone. The book goes over anti-establishment, corrupt systems, politics within power, racism, climate change, and more. The book was far ahead of its time.

Know My Name by Chanel Miller

In 2015, Brock Turner sexually assaulted an unconscious woman. For four years, that woman was known as “Emily Doe”- her name is Chanel Miller. Miller was sexually assaulted by Turner on Stanford University’s campus. Two Swedish graduate students were passing by whilst biking when they saw the scene and chased Turner only to then tackle him to the ground and restrain him until police arrived. I think we’ve all heard the phrase “promising young man” – well that’s exactly what Miller heard too. While she was in court, the photos of her unconscious, beaten body presented to the jury, the testimonies of the witnesses, her parents and sister there with her, everyone holding their breath to see if justice was on their side – and the response they received was he was a “promising young man”, “don’t ruin his future”. Turner was convicted of three felonies but only served three months of a six-month sentence in county jail. It was a slap on the wrist. Turner’s testimonials included a third grade teacher, his parents, and his friends. The case not only showed us, once again, that the system is not on women survivors’ side, but it also illuminated the race and wealth gap. Know My Name is one of the first books that has given us the raw, vulnerable, powerful perspective of women survivors of sexual assault. It’s a book that you would think would make you feel heavy after reading it, but Miller is a master of her craft. She is able to incorporate her sense of dark humor throughout the book. There’s a sense of humanity within her writings. She was able to write the book in a way that makes you feel like you were there. Almost as if you could see the hospital room she was in, smell the sterility of it, feel the cold tile floors. Whilst the media paints a picture that feels more detached – that allows for society to use others’ lives as a play in politics – Miller does not hold back. Her picture, her view, is one of a survivor. I highly encourage everyone I meet to read this book (just ask my roommate). It will truly change your perspective on sexual assault, what it is to be a woman survivor, how it affects everyone that surrounds them, the journey of PTSD (Post Traumatic Stress Disorder), the justice system, and how people’s lives change – in every aspect – after a sexual assault occurs. Once I picked it up, I couldn’t put it down. When I first bought the book, it was unknowingly two days before a two week long quarantine. I started the book about a week in and found myself sitting on my bathroom floor (it was the only quiet place in the house) for over four hours taking in every word that Miller wrote. I felt like she was reading it out to me, as if she was sitting across from me on my bathroom floor telling me about her journey. I finished it in less than six hours – only to pick it back up and start it over again. I re-read the book three times during that last week of quarantine. I hope that you all feel the same way that I did when I read it, I hope that you won’t be able to put it down, and I hope that your perspective on women survivors changes forever. Say her name, know her name, tell her name – Chanel Miller.

Everything I Never Told You by Celeste Ng

Have you ever thought about how people would react to your death? What would they uncover about you? If they would see that you lived an alternate life? Or would they already know your life – know who you really are? Well, that’s exactly what happened to Lydia. Pushed by an overbearing mother who wishes to live through her daughter and a distant father, Lydia decides to start living the life that she’s always wanted. To try to find herself – who she really is without the ideals of her parents. Only to turn up missing, and soon after, found at the bottom of a lake. The story is told from the perspectives of all the characters, each chapter changes in perspective. It could even be called a thriller mystery in a sense. However, the mystery for the reader is not whether Lydia is still alive, or where she’s gone – we learn on the first page that Lydia is dead, her body found at the bottom of the lake. We watch as the authorities come to the Lees’ home to ask the uncomfortable questions – Was she doing well at school? Who were her friends? Did she seem depressed? Did she ever talk about hurting herself? – and her parents, sister and brother all find themselves unable to answer. Instead, the mystery is why they can’t bring themselves to tell one another, or the police, what they believe is behind her disappearance. The delicate balancing act of the Lee family is thrown into chaos from the beginning of the story. Everything I never Told You is a gripping page turner and a sensitive family portrait that explores the ideas of privilege, culture, and 1950s racism.

Ocean Vuong’s debut novel explores and unpacks the beauty, devastation, and pain that follows in the aftermath of a trauma. On Earth We’re Briefly Gorgeous is a coming of age story that takes the view of a young Vietnamese American writer’s letters to his illiterate mother. His mother’s education ended at seven, when her school in Vietnam collapsed after an American napalm raid. The chances of his mother reading his confessions are slim, but he doesn’t write them with that purpose in mind. He writes them as a way to process and articulate the difficult memories of his childhood – not as a way of direct communication with his mother. Through writing, the son is “trying to break free”.  His letters reveal a fractured family, torn by harrowing experiences – those of his mother and grandmother in Vietnam, and of his own from growing up in the 1990s. Abused by his schoolmates, socially isolated, the narrator, Little Dog, eventually finds a sense of solace in his first love affair, “a tragic relationship with a rough American teenager ravaged by drugs”. His true sense of solace and peace comes from reading and writing, which cracks open his understanding of his family’s history. Vuong writes of the new immigrants’ nail salon work, coming in with a temporary mindset yet finding the situation permanent, “a place where dreams become calcified knowledge of what it means to be awake in American bones – with or without citizenship – aching, toxic, and underpaid.”  He writes of Hartford, Tiger Woods, and the plights and oppressions of the Vietnamese community that have gone unseen and disregarded by the rest of the world. As I read this book, I had to periodically take breaks. Not because the story was slow or lengthy, but because of the truly shattering perspective that Vuong shares with you. As I read, I slowly found myself seeing the things he wrote about in my everyday life, in my friends’ lives, in my family’s lives – but the question I asked myself, as I saw these similarities, was ‘who are these similarities shared with? Little Dog – the oppressed? Those used as scapegoats within a society built on oppression? Or the assailants?’ You’ll find yourself reevaluating your view on those around you, on the painting that has been so cleverly and carefully stroked together, that you call ‘your life’.

This is how it Always is by Laurie Frankel

The majority of society believes that children don’t develop their sexuality until they’re, at the very least, in middle school. But Frankel breaks this stigma in her emotionally wrecking story that breaks you down and then builds you right back up. Poppy has always known that she’s a girl. Even when she was Claude. Claude was not like his brothers. He wants to wear a purse and a dress in kindergarten. He wants hair long enough to sit on. When he grows up, Claude says, he wants to be a girl. Frankel actually took inspiration from her own life. Her daughter, who was once her son, came out to her when she was only six years old. Frankel took this part of her life and used it as a way to educate others. However, those are where the similarities end for Frankel’s novel. She told NPR in an interview “The nice thing about my life is that it’s pretty boring, which is really how you want your life to be – but not how you want your novel to be. So in fact, this really is … very, very made up.” This is How it Always is is about fairy tales, family, secrets, and transformations. It’s one of my favorite books that I recommend you read if you ever find yourself with spare time.

Prue is a first-year Sociology & Criminal Law double major at Northern Arizona University. She hopes to use aspects of her majors to work in the journalism industry. She is currently an intern for Her Campus and a freelance graphic designer & artist. When she's not writing or doesn't have her eyes glued to a screen you can usually find her knitting, reading, or sewing.
Similar Reads👯‍♀️ 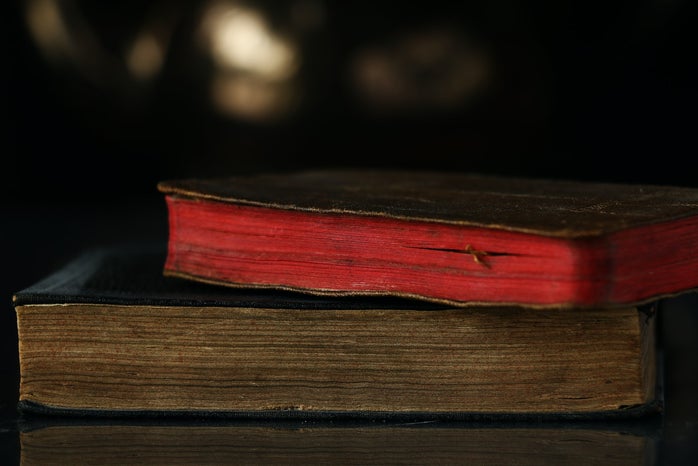 Culture
Coping with the Stress of Finals
Read more →