The Among Us Impact in Gaming

Among Us banner fanart. Image from Reddit.com

“Anyone wants to try out Among Us?” I asked on a Friday night in a group call with my friends. 15 minutes later, we were all hooked. 2020 was given the internet’s top Mafia-inspired multiplayer game created by InnerSloth LLC. With an ideal group of 10 players, there are 2 imposters and 8 crewmates. Crewmates are in charge of completing tasks around a ship while attempting to remove the imposters. Imposters can eliminate crewmates and sabotage the ship to delay the completion of tasks. Among Us is full of betrayal, deception, and high-IQ plays. Players can join games locally or online and complete achievements for in-game rewards. Two years since the release, curiosity rose about how the game has impacted the gaming industry today.

The game was originally released on June 15, 2018 and suddenly skyrocketed in popularity during the summer of 2020. This was when the COVID-19 pandemic was at its highest. No one was interacting with anyone, shops were closed, and everyone was isolated in their own homes. A growth case study found that the game’s user base increased by 1600% in 8 months. The game currently boasts over 3.8 million players around the world. Content creators on YouTube, Twitch, TikTok and other social media platforms began posting about various memes, fanart, strategies, and highlights. In September 2020, Among Us was at its peak as it was the third most popular game, behind League of Legends and Fortnite on Twitch. What helped make this trend so quick to hop on was the accessibility of the game. It is available on PC, Android, iOS, and Nintendo Switch with the mobile applications being free to play. The multiplayer function was also the main reason for its popularity. Social media and word-of-mouth marketing were all the world had at the time, and Among Us seized that opportunity. The game is now looking to launch on Xbox and Playstation very soon. 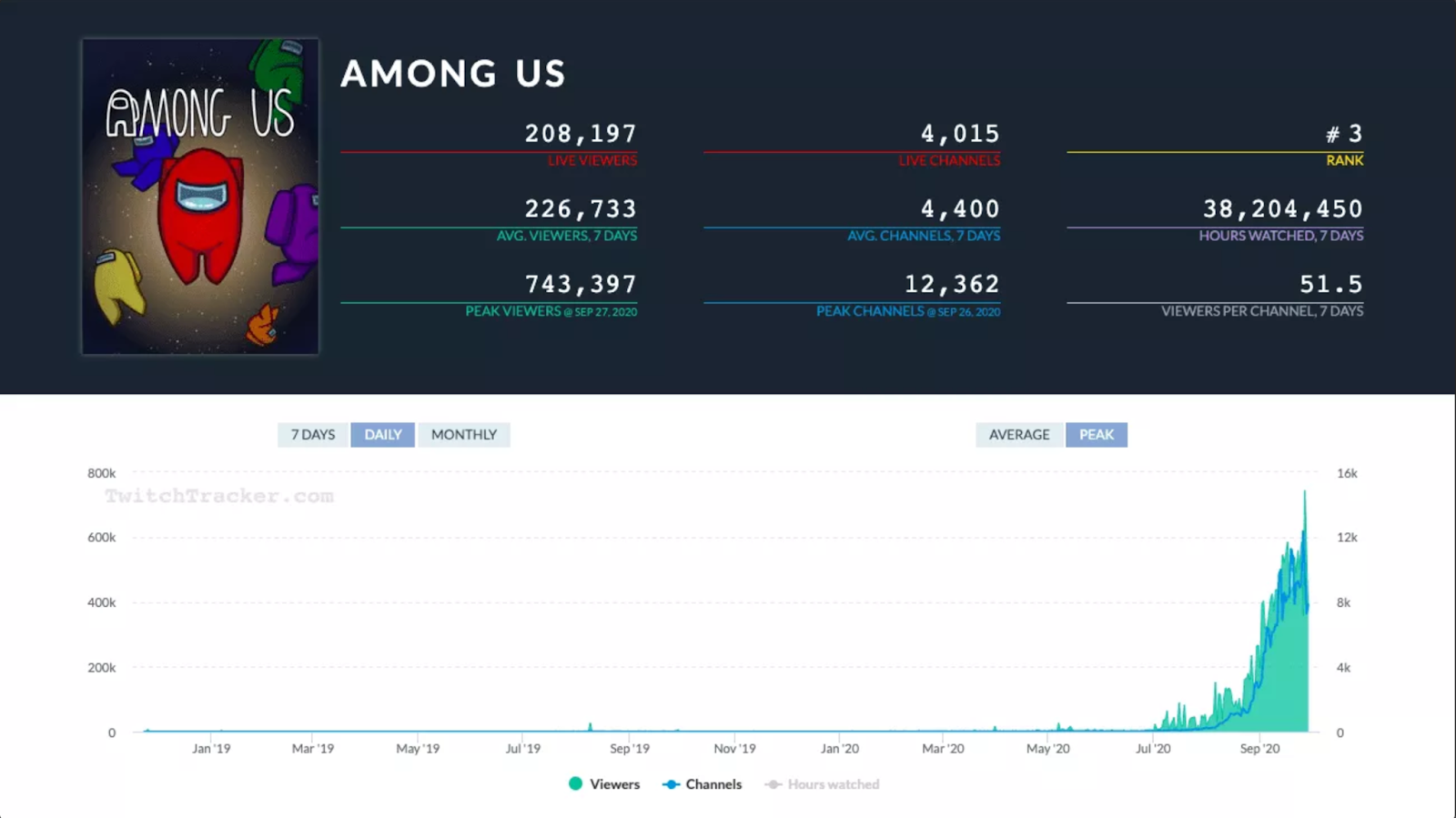 Among Us statistics on Twitch using TwitchTracker from September 2020. Image from Moengage.com

The collaborative aspect of Among Us opened up doors for smaller creators to interact with those who have a larger following. Popular Twitch streamers like xQc, PewDiePie, DisguisedToast, Valkyrae, and Pokimane invite smaller streamers to games, and it brings exposure to those looking to grow. This has now led to a bigger group of well-known streamers that we know today like CORPSE Husband, TinaKitten, Fuslie, and more. The lobbies that streamers would create are all talented and have unique personalities. It was like a big mashup of many different communities. Even politicians, like Alexandria Ocasio-Cortez, joined in on the fun. Streaming no longer became an individual self-motivating job, but it became more about family, community, and an overall positive experience for both streamers and the audience. Among Us greatly impacted how streamers go live today. It has brought more connections and unity to the world–even with the irony of the game being full of lies and mischief! No matter where you are in the world, it has been much easier to make connections through gaming and streaming.

I have been around the gaming industry since I was in middle school, so finding new games was not an issue for me. What I was shocked to realize was how addicting it was to play Among Us, especially amidst the COVID-19 pandemic. It was the perfect way to connect with friends virtually and have fun doing so. It is very rare for a game to keep its popularity; the last time I was this invested in a game was when I first started playing Minecraft in 2014. While I may not play as often as I used to, I continue to rewatch old YouTube videos from popular creators and tune in whenever some of my favorite streamers are streaming the game. Among Us is just one of those games that are now a classic to me. I always feel a rush of nostalgia whenever I think back to that fearful and unknown time in the world. Being involved in the game helped make life a little better among all the chaos.

Among Us has gone through some major updates since, and many people still play to this day. Have you ever played Among Us, and what was your experience like? Let us know by tagging us at @HerCampusSJSU on Instagram!

Hi! I'm Janice, and I'm a fourth year business marketing major at SJSU. I love exploring new food places, hanging out with friends, video games, reading and doing portrait photography. Thank you for reading through my stories!
Good stuff only!