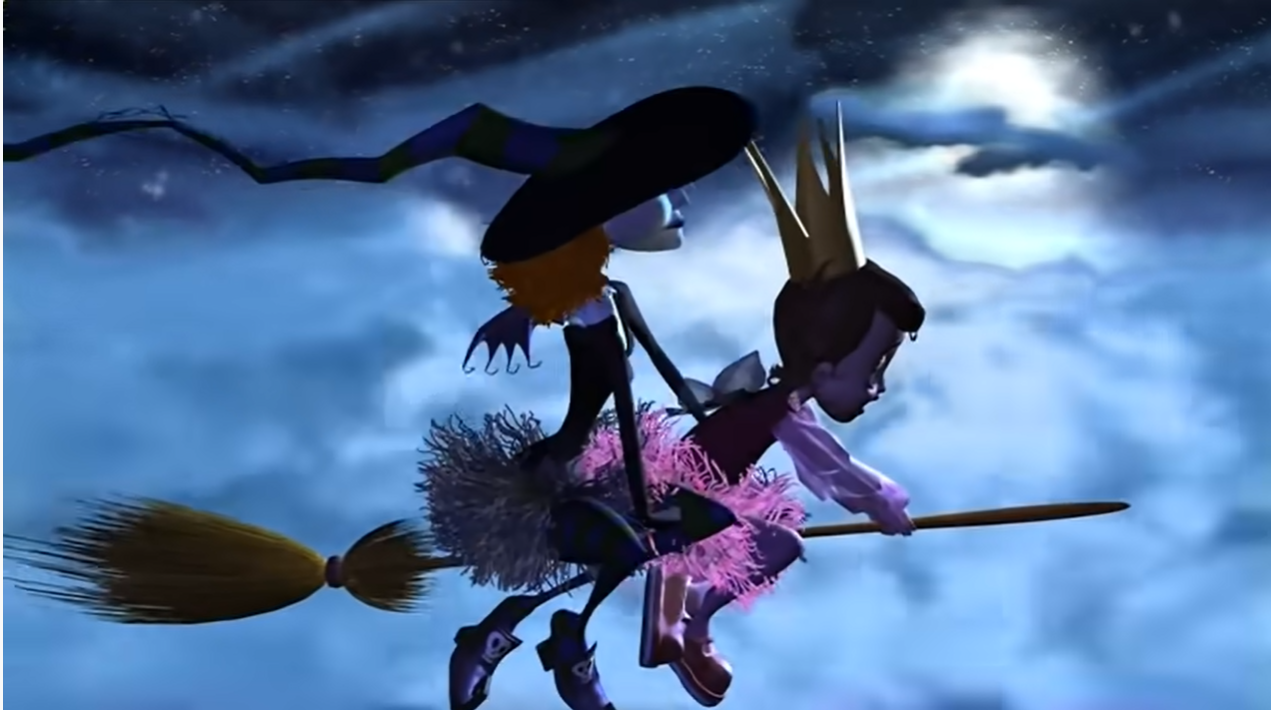 Everyone has that one movie they’ve seen when they were younger that they thought was weird and oddly charming; Something amazing that you’ve seen as a kid that looks strange when you watch it when you’re older.

For me, that was “Scary Godmother”.

“Scary Godmother: Halloween Spooktakular” is a 2003 computer-animated Comedy film based on the book series,  of the same title, by Jill Thompson.

The movie follows Hannah Marie, a little girl who, after getting tricked by her cousin Jimmy and his friends, encounters Scary Godmother and her friends for a Halloween party at the Fright Side.

Mr. Skully Pettibone the Skeleton, Harry the Werewolf, kid-scaring fuzzy monster Bug-A-Boo, and vampire family Count Max, Countess Ruby, and their son, Orson, all make an appearance at the party.

After the party, the group goes to scare Jimmy and his friends for tricking Hannah Marie; the movie ends with Scary Godmother giving her a key to go to the Fright Side any time she wants.

The sequel, “Scary Godmother: The Revenge of Jimmy”, released in 2005, follows the Halloween after the first movie. The movie follows the plot of the second book, titled the same name.

After being scared by the monsters from the Fright Side, Jimmy develops a fear of monsters, deciding to end Halloween and erase it from the calendar.

Meanwhile, the Fright Side and all its beloved characters are constantly affected by Jimmy’s attempts as they plan their next Halloween party.

When I saw this movie as a kid, I loved it. I don’t exactly remember how I found the movie, but I remember really enjoying it.

It used to be aired on Cartoon Network for Halloween from 2004-2012. When I found it again as an adult, it felt like a big fever dream. I remembered bits and pieces of it and didn’t think it was something real until I found it again and rewatched it.

My friend, who has only seen the movie as an adult, hates it and doesn’t have the childhood nostalgia that I connect myself with.

While the animation hasn’t aged the best, it does work well for the movie itself. Despite the terrible graphics, it has appeal.

The music is catchy and despite how cheesy it is, the movie is actually funny. I always make sure to watch it every Halloween.

I recommend you watch it if you haven’t seen it. It’s a movie you have to watch to experience it at its best.

Both movies are free to watch on YouTube for a movie marathon.

You can watch “Scary Godmother: The Revenge of Jimmy” here.

Do you have a favorite Halloween movie? Let us know @HerCampusSJSU.

I am a Journalism major at SJSU. I fell in love with it and I hope to travel the world to learn new things and meet new people. I hope one day to have my works published for the world to see. In my free time, I like listening to music while I scroll aimlessly through social media or talking to my friends.
Good stuff only!