Why a Visit to Great Exuma, Bahamas Should Be on Your Bucket List

Over winter break, I went on the best vacation ever. My parents surprised my sister and I with a trip to Great Exuma in the Bahamas for Christmas this past year. We had all been to Nassau, Bahamas a couple of times, but Exuma was a completely different experience. My entire family, my boyfriend, and my aunt’s family all stayed in a house on the beach. We went on multiple different excursions that were some of the craziest experiences I have ever had. If you ever want both a relaxing and exhilarating vacation, then Exuma, Bahamas is the place for you.

The first excursion that we went on was an eight hour boat trip. When we first heard that it was eight hours long, we were all a little apprehensive considering that seems like a really long time to be on a boat. But, when the day was over, we honestly wanted to stay longer. We started the day by boating for about two hours, then we reached our first destination. Our first stop was a cave nicknamed Thunderball Grotto after a James Bond movie that was filmed in it. We jumped in the water and swam over to the cave. Once we were in we spent forty-five minutes snorkeling and feeding multiple beautiful species of fish. There are areas where you can even stand for photo opps. After we were done, we loaded back into the boat and started for our next stop -- the famous “Pig Beach.” It is home to tons of feral pigs that love to eat snacks provided by tourists and sit for photo ops. Some of them even love laying on the beach and getting belly rubs. After we spent a little bit of time with the pigs, we stopped to get some food on a little island where we could try some of Exuma’s famous foods like their conch salad. We relaxed for a little while, got a couple of drinks, and then got back on the boat to our final destination of the day. We boated for about thirty minutes until we pulled up to a dock and secured the boat. When we looked down, there were around twenty-five nurse sharks that we were going to swim with. Stepping into the water was a little intimidating, but once we were in,  it was so cool to see these majestic creatures swim and to touch them and stand around them. After an incredible day, we headed back to our house.

After that day we spent a couple days staying at the house relaxing, kayaking, swimming, snorkeling, etc. We had a beautiful porch that we could jump off of and land right in the ocean. At our own house, we could see sharks, sea turtles and giant stingrays. Even our own house felt like its own excursion.

If you think it couldn’t get any better, just wait. After hanging at the house for a couple days, we decided to go on another excursion. Similarly to the first excursion, we went on a boat, and traveled for about an hour before reaching our first stop. We reached an island that was known for its high population of wild sea turtles. Our guide brought a bunch of chopped up conch and started throwing it in the water. All of a sudden, tens of sea turtles of different sizes began to appear. We were able to feed them, pet them, and swim with them. This was by far the highlight of our trip in my opinion. After spending an hour or so here, we headed to our next stop. Our guide beached the boat on an island and all of a sudden hundreds of iguanas began to appear out of nowhere. We got to feed them and pet them. I have never seen so many wild animals in one place; it was crazy.

After we left there we headed to our final stop. It was a beautiful sand bar in the middle of the ocean, where a guy had his boat beached and was selling food and drinks. He even had a volleyball net set up. It was such a cool spot to hang out and relax.

This was by far the best place I have ever been. Our guides on both excursions were incredible, all of the people on the island were so nice, and it was just a great experience overall. I hope I am able to get back there one day.

Maya Faich is a sophomore from Hanson, MA. She loves traveling, hanging out with friends, chipotle and meeting new people!!
Similar Reads👯‍♀️ 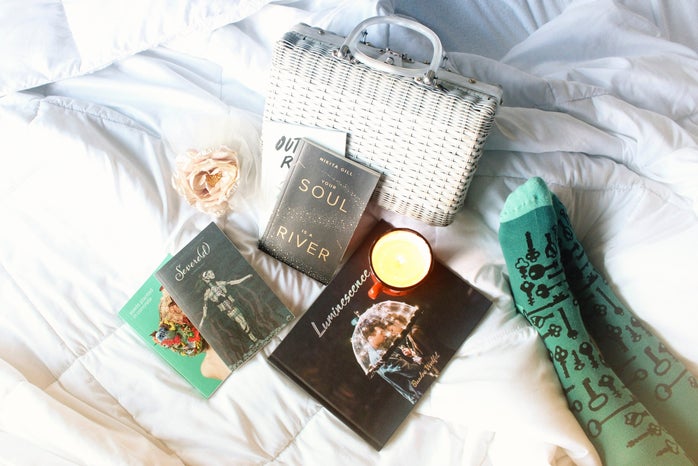 Entertainment
12 Fallish Books for Every Type of Reader
Read more →

Sex + Relationships
Hot take: long distance is not as hard as everyone else makes it out to be.
Read more →
Good stuff only!