When it comes to watching film and television, one should always strive to broaden their horizons and delve into new narratives that are informative, all-inclusive and representative, while still being entertaining. In light of LGBTQ+ History Month, especially, people should consciously be making an effort to consume narratives written and directed by members of the LGBTQ+ community, that have inclusive, realistic casts that go beyond stereotypes of the community.

While some may see film and television as a mere form of escapism and entertainment, the representation of certain minorities on the big screen undoubtedly impacts our social views, which we then internalise, as audience members. One of the problems many LGBTQ+ members face within the film and tv realm is the lack of queer cast members on set, given that most characters on mainstream shows end up being played by straight people who have to act ‘gay’ (?) for their role. This allows them to have the privilege of acting ‘gay’ without the real-world repercussions of being gay, in turn, also perpetuating damaging stereotypes for queer identities and taking away the opportunities for real, gay actors to act themselves.

Within this piece, we have comprised a list of LGBTQ+ recommendations to not only better inform yourself, but also to lay back, put your feet up, and enjoy a good show.

It seems only right to begin this list with one of my favourite TV shows of all time, It’s A Sin, the utterly heartbreaking and magnificent series that follows a group of friends in the 80s as they move to London and discover the joys and freedom of the queer community before the AIDS crisis. ‘Ritchie’ the protagonist comes from an unthinkingly homophobic household in the Isle of Wight and eventually decides to pursue his dreams as an actor. He befriends Jill, Roscoe, Colin and Ash as they move into a flat which they lovingly name ‘The Pink Palace.’

As the series unfolds this group of friends navigate the terrifying unknown, as their acquaintances begin to disappear and the public start to deem this health crisis as ‘gay cancer.’ I won’t spoil the ending for you but be prepared to sob your heart out as these well-loved characters suffer through the pain that was the AIDS crisis. 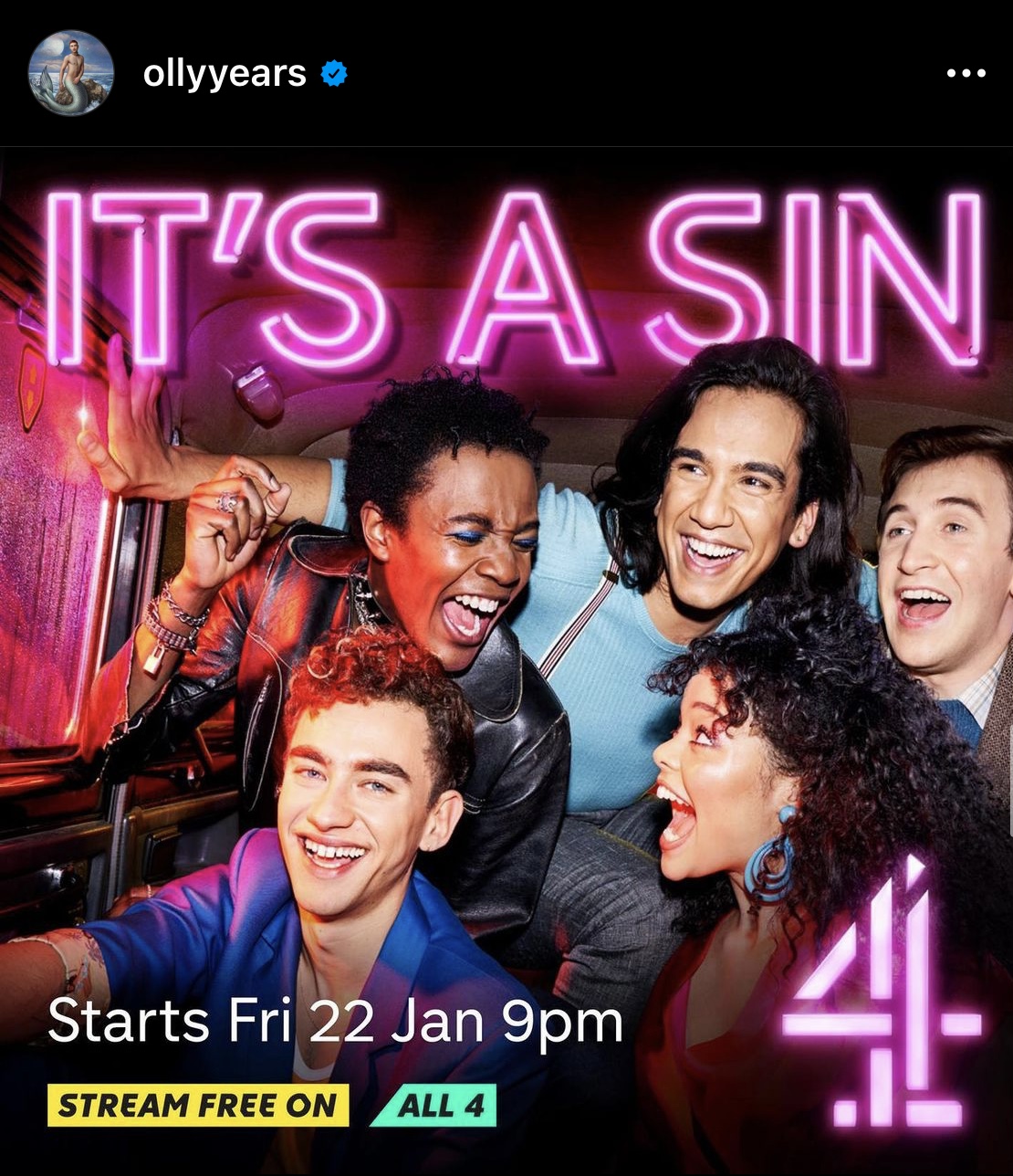 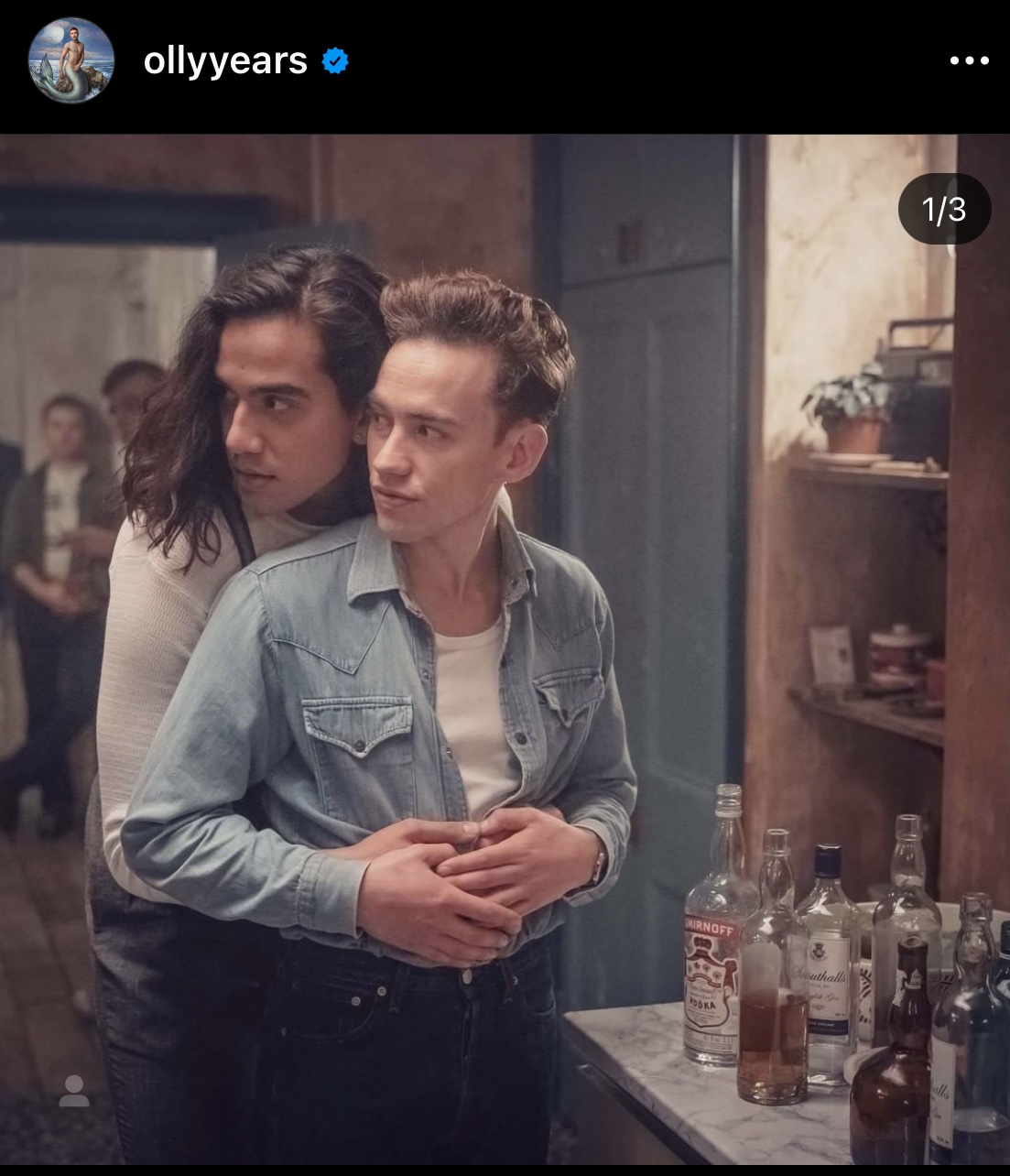 Not only is this show a spectacular piece of TV, but it also contains tonnes of queer representation. Writer and creator of the show, Russell T. Davies, came out as homosexual in his teenage years and vowed to only cast gay actors as gay characters in It’s A Sin– something that the rest of Hollywood needs to take on board.

After the heartbreak of It’s A Sin I felt like I needed to discover more about the AIDS crisis, which led me to The Normal Heart, which was playing at the National Theatre last year. Written by American playwright and gay rights activist, Larry Kramer, The Normal Heart is largely autobiographical; set in early 1980’s New York, it follows the life of the writer and activist, Ned Weeks, who aims to unite the gay community following the aids epidemic. 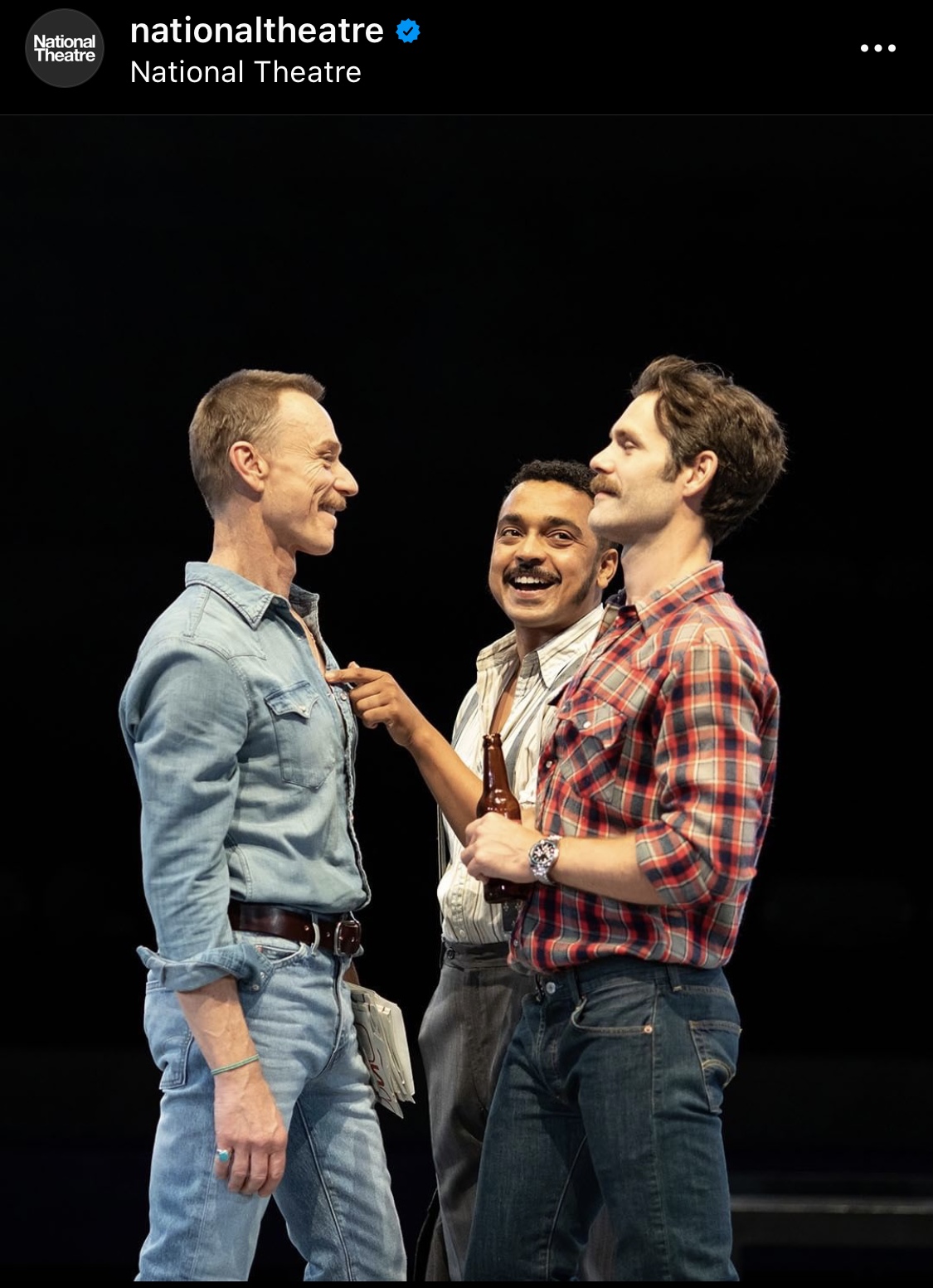 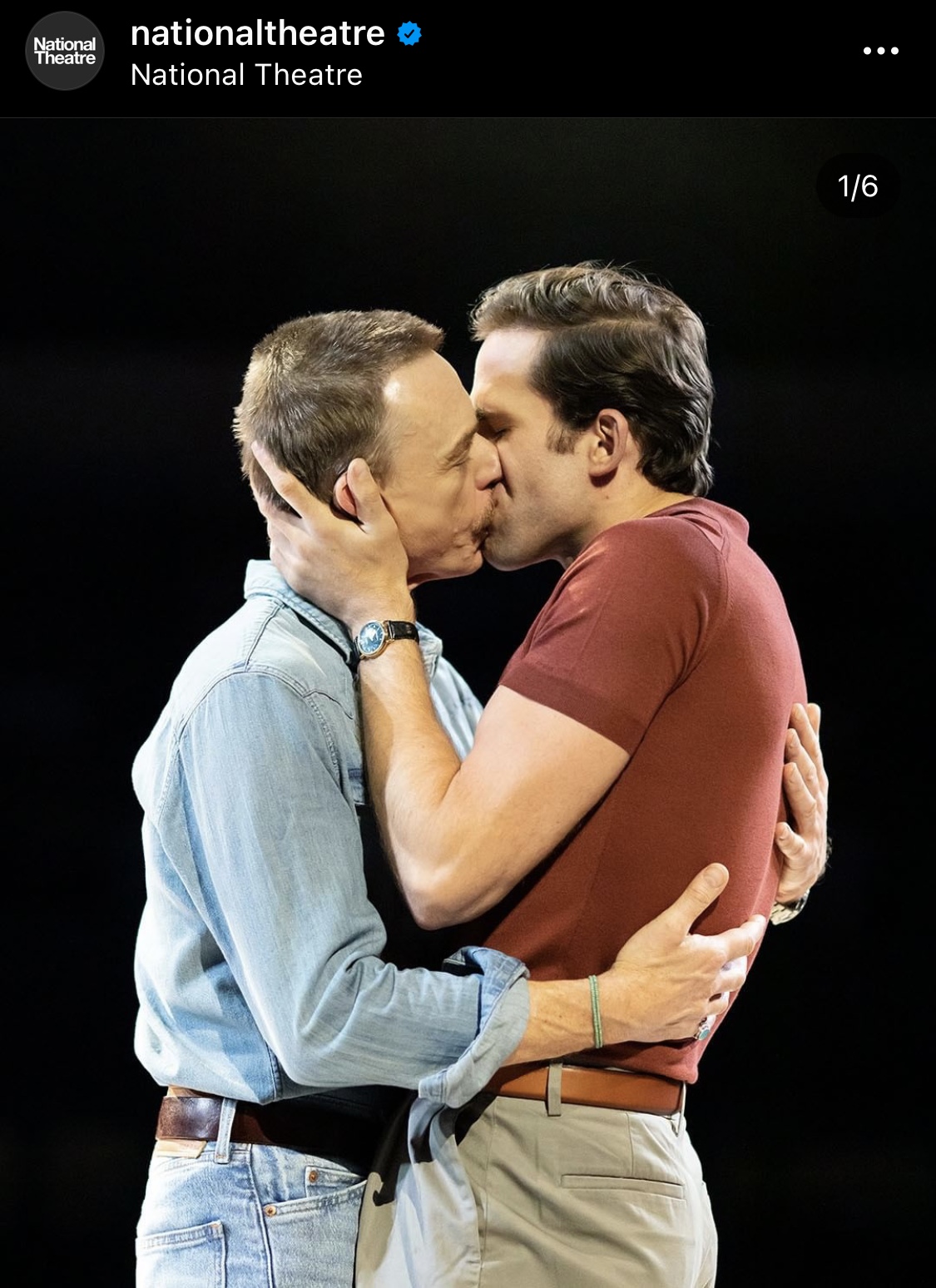 Although the play isn’t running at The National Theatre anymore, an HBO movie adaptation was released in 2014, directed by Ryan Murphy and starring A-listers like Mark Ruffalo, Julia Roberts and Matt Bomer. This film is equally heart-wrenching, so, once again, prepare to sob your heart out.

Pride is similar to The Normal Heart in that it is based on a true story. It follows a group of lesbian and gay activists who find unusual allies in a group of miners as they fight against Margaret Thatcher and attempt to raise money to help those affected by the British Miners’ strike in 1984. Pride is a historical, comedy-drama film that recounts and informs those of key moments in LGBTQ+ history, beyond the AIDS crisis.

It’s hearty, uplifting, and very nostalgic, while equally being as informative and crucial to our understanding of the community. 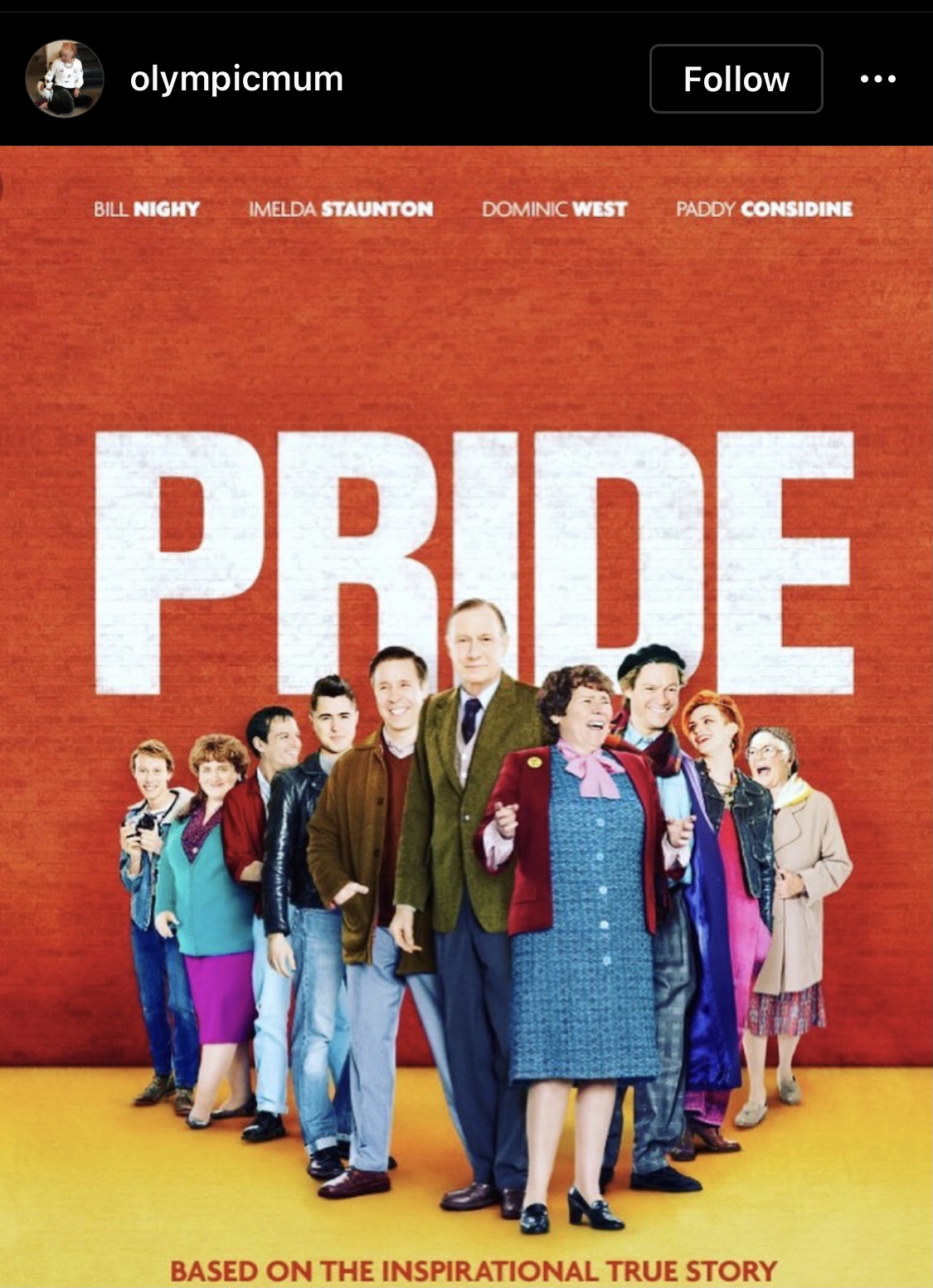 Booksmart follows the lives of two best friends Amy (Kaitlyn Dever) and Molly (Beanie Feldstein), who are a few days away from graduation. Amy and Molly realise that they’ve spent their entire high school experience studying and not having any fun, leading them to try and cram as much adventure as they can into one night.

Not only is it heartwarming but it also portrays young queer love in a beautifully awkward way. Part of Amy’s storyline follows her as she begins her first gay relationship. Interestingly, it doesn’t focus on her coming out story, which has been, in my opinion, overdone in films; it follows her as she begins to explore actually falling for a girl.

The only love scene in the film is a queer love scene, which struck me as an audience member, given that it was one of the first times I’d watched a wlw relationship on screen that didn’t focus on heteronormative love scenes. 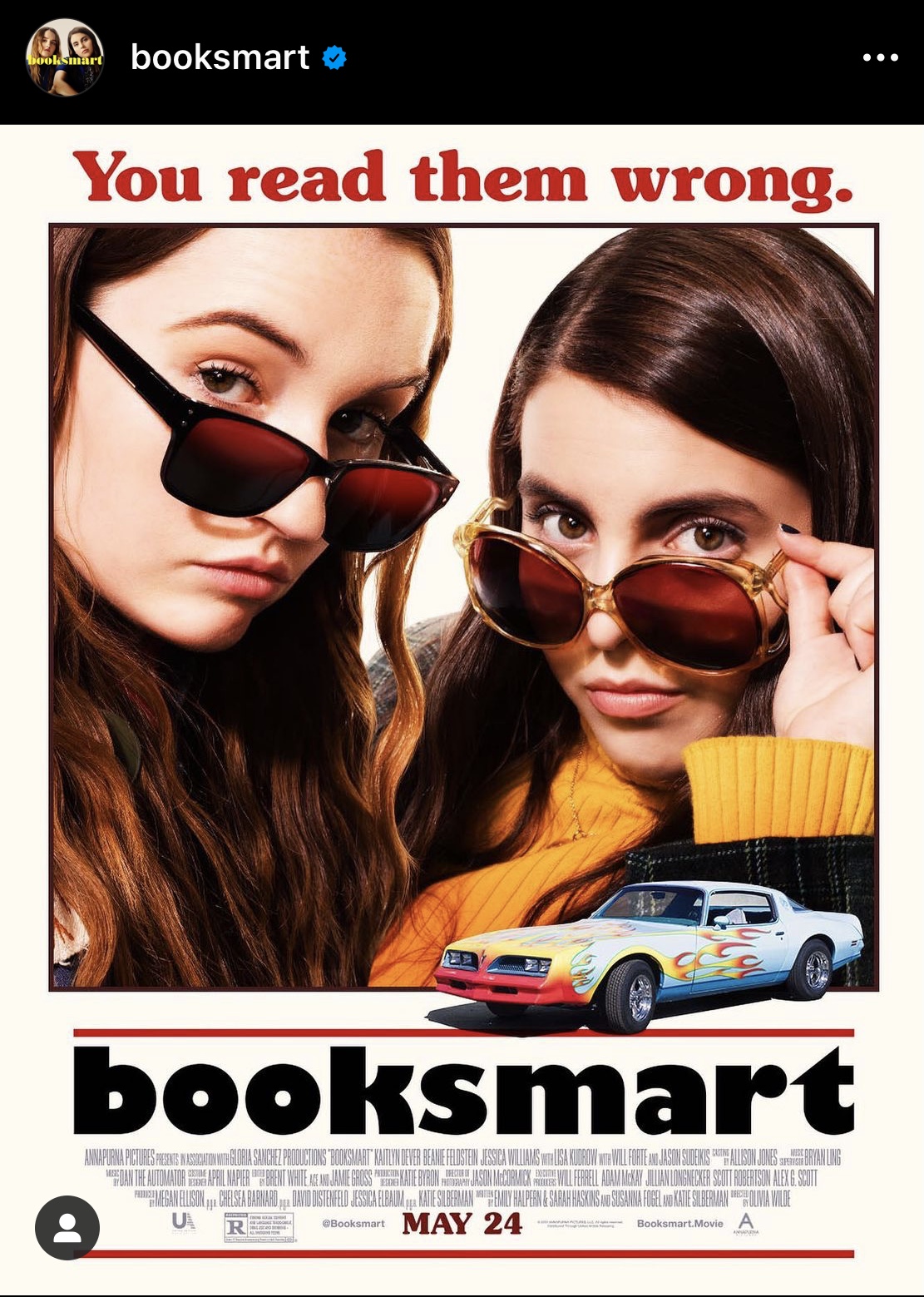 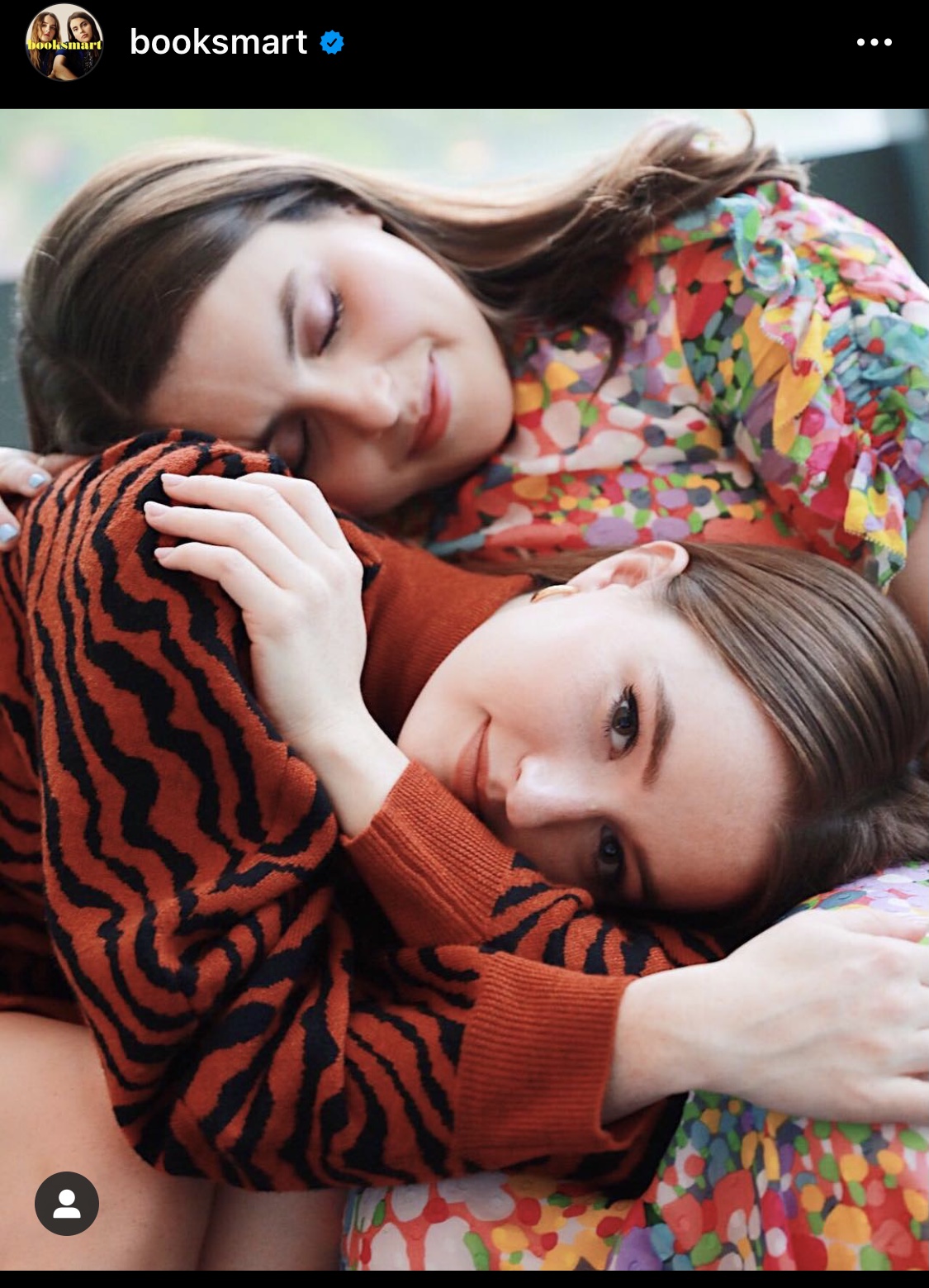 In an interview with Entertainment, Feldstein notes that “By doing that, you’re asking that to be the norm. By showing queer sexuality, and making heterosexual people relate to it is actually really deeply meaningful.”

If you’re looking for an easy to watch, cheesy, teenage American drama this is the one to watch.

Focusing on the underground New York house, ball and drag culture scenes in the 1980s to early 1990s, Pose explores the unravelment of trans and queer identities during the AIDS crisis amidst a musical and social backdrop. The series follows Blanca Rodriguez-Evangelista (Michaela Jae Rodriguez), a former member of House Abundance, who forms a house of her own after being diagnosed with HIV. She takes in Damon Richards (Ryan Jamaal Swain), Angel (Indya Moore), and Lil Papi (Angel Bismark Curiel) and forms the all-encompassing Evangelista house.

Houses were self-elected communities that took care of LGBTQ+ youths who had been rejected by their birth families; each house would compete in balls and challenge each other in various categories, such as dancing, which is where voguing originates from, dress, and talent.

Pose is a brilliant show, not only filled with great representation but one that grapples with numerous issues that members of the LGBTQ+ face, from racism, transphobia and stigmatised sex work, to the AIDS epidemic.

With its all-inclusive cast and its almost too ‘woke’ self-awareness and relevancy, Euphoria sits as my favourite show in the entire world. Often compared to Channel 4’s Skins (2007-2014), for being a show that deals with ‘accurately’ portraying teenage lives, drug abuse, and the issues that they face; HBO’s Euphoria surpasses the expectations of teenage-drama series, presenting, instead, a raw, realistic and holistic show that has transcended the boundaries of cinematography, makeup and character within television since its debut in 2019.

Hunter Schafer, who plays Jules, has openly spoken about her identity as a transgender, queer woman. In interviews, she disclosed that this was her first acting role and that in order to transition from modelling to the big screen, she would like to bring to life a trans character. Director of the show, Sam Levinson, provided her with a trans counsellor to help her feel more comfortable on set, and eventually, Jules received her own episode (The ‘Specials’ that came out amidst the pandemic) where she delves into her psyche as a trans, queer woman in a therapy session.

One of the main storylines in Euphoria is the wlw between Rue (Zendaya) and Jules, though as messy as it becomes, it attempts to capture teenagers coming to terms with their sexuality. As Maddy (Alexa Demie), says herself, ‘Sexuality is a spectrum, Nate. It’s not like anyone’s 100% straight or 100% gay’. Euphoria attempts to present its characters within this spectrum, none of them conform to rigid social roles and they’re all fluid in the way that they express themselves, both sexually and in the way they dress. 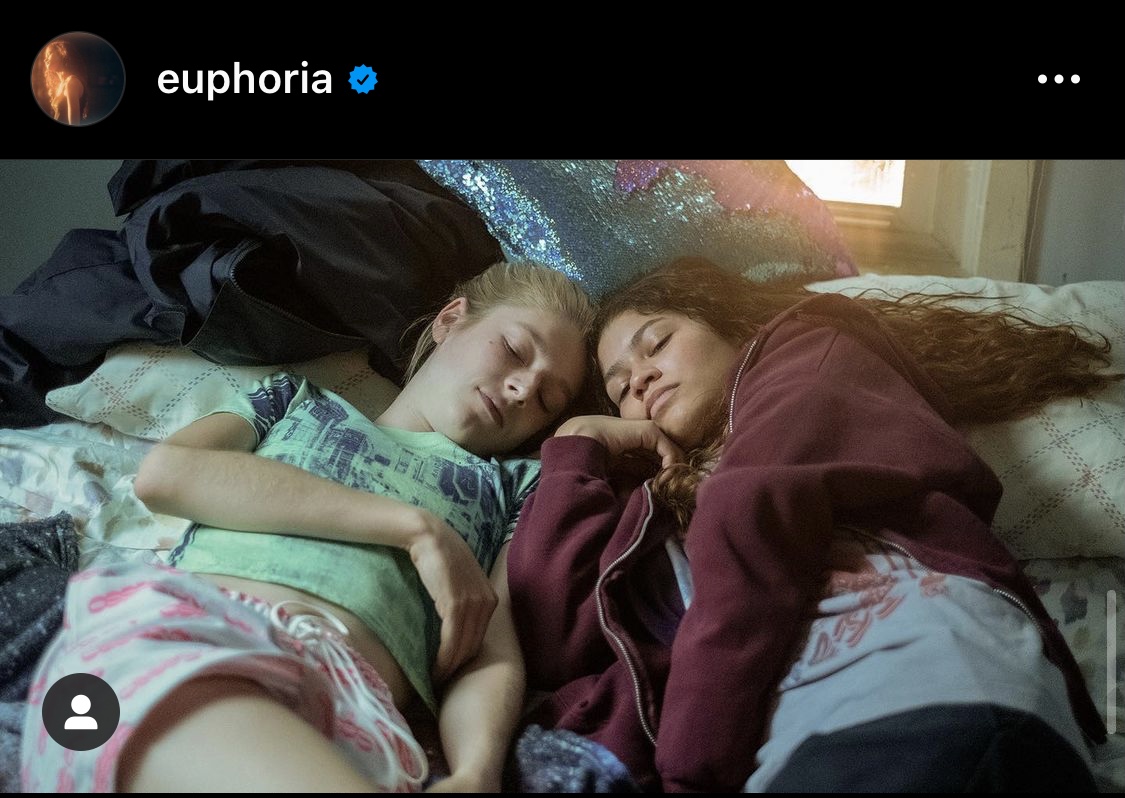 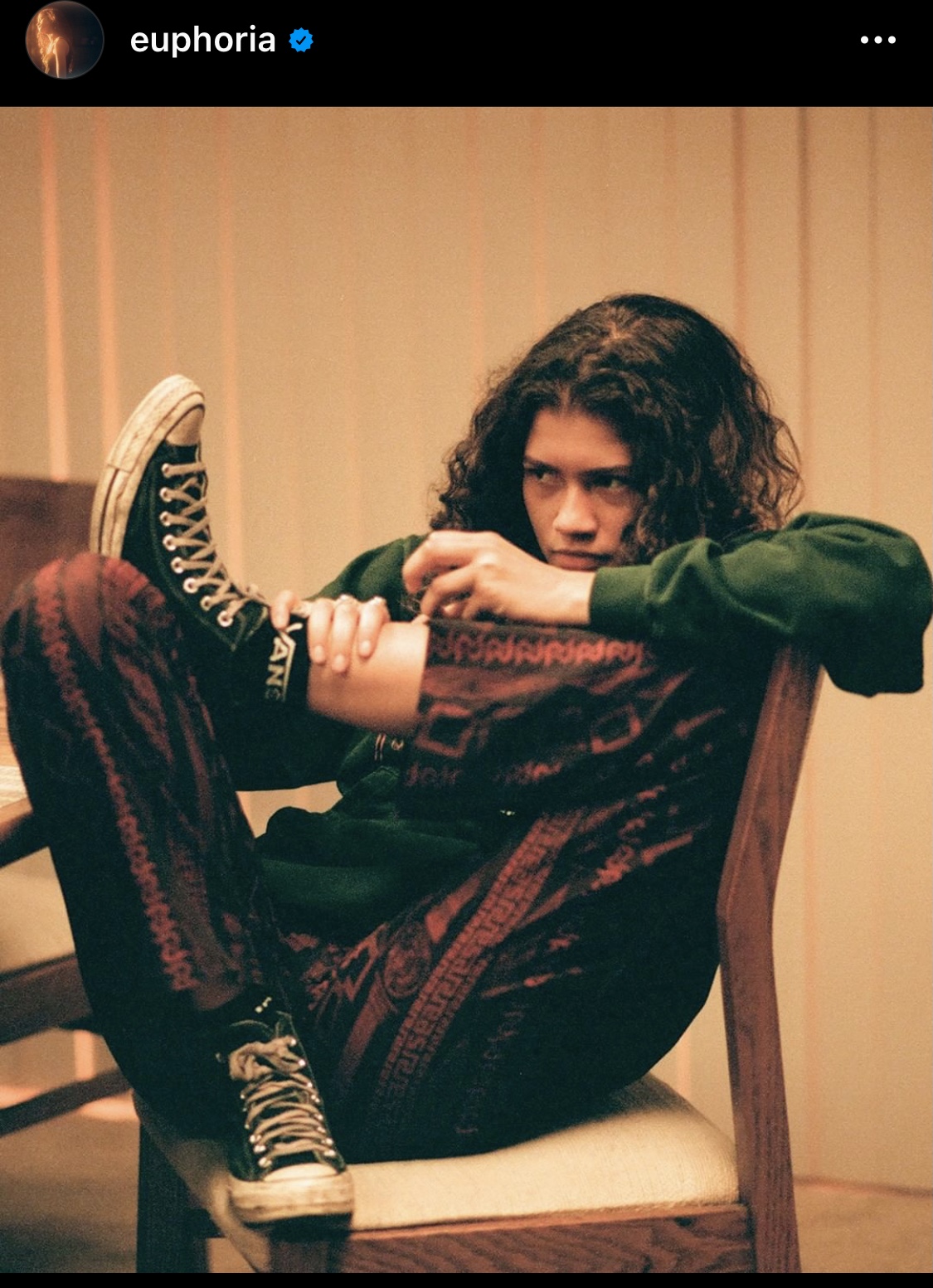 In season 2 in particular, the show delves into further, complex issues for older members of the LGBTQ+ community, ultimately, showing a side to LGBTQ+ representation that is not particularly addressed enough- a middle-aged queer man with a wife and family accepting their sexuality and confronting them about it. Euphoria always tries to capture realistic scenarios, which are not sugar-coated or have happy endings, but it is this brutality that gives the show its edge.

Other cast members, such as Sidney Sweeney, have come out and been open with their sexuality, alongside Hunter Schafer who disclosed the difficulties with finding labels and that she was still exploring her sexuality, coming to the conclusion that she ‘might be bi or pan’. Zendaya and Alexa Demie who have not spoken about their own sexuality have supported gay and trans rights, in general.

All in all, Euphoria attempts to capture the many issues an array of teens face, ranging from sexuality, identity, drug abuse, friendships, abusive relationships, grief, and trauma. It is definitely worth the watch, as a show that is beautifully filmed, authentic and unapologetically deals with heavy plot lines.

Grace is an editor for the Sex+ Relationships column and attends the University of Bristol. She is currently a second year Liberal Arts student.
Evelyn Heis

Editor of the Sex & Relationships section for Her Campus Bristol and a regular contributing writer! English Literature student at the University of Bristol and a lover of coffee, books, and film :)
Similar Reads👯‍♀️

Culture
The Power of Stories: Paula Rego at the Arnolfini
Read more →

Entertainment
8 Sunny Comfort Films to Get You Through Exam Season
Read more →
Good stuff only!