Today, let’s take a look at the top 10 looks according to the theme. 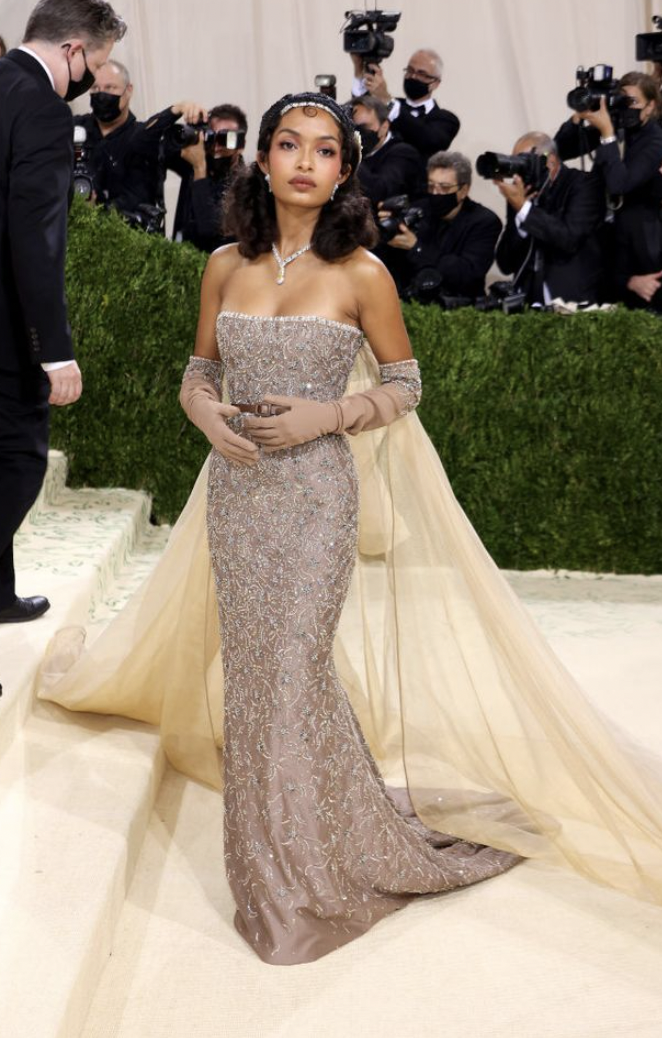 Shahidi, who is wearing a beaded Dior gown, paid homage to the American phenomenon Josephine Baker. The look was created in partnership with Yara Shahidi’s stylist, Jason Bolden. Yara’s choice to wear Dior was instinctual because she was named Dior’s global ambassador this year. Yara’s subtle high glam look reflected Josephine Baker, wearing her hair with a curl that was flush with her face. This look represented American Independence because Josephine Baker was not only world-renowned for her performances but contributed to the war effort as a  spy during  World War II. Shahidi and Baker share a passion for activism. 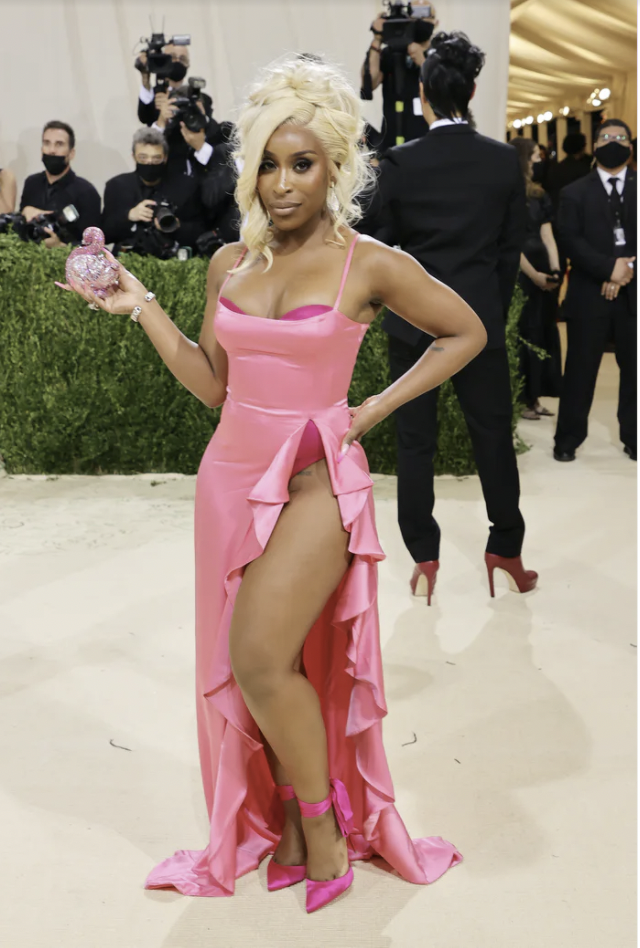 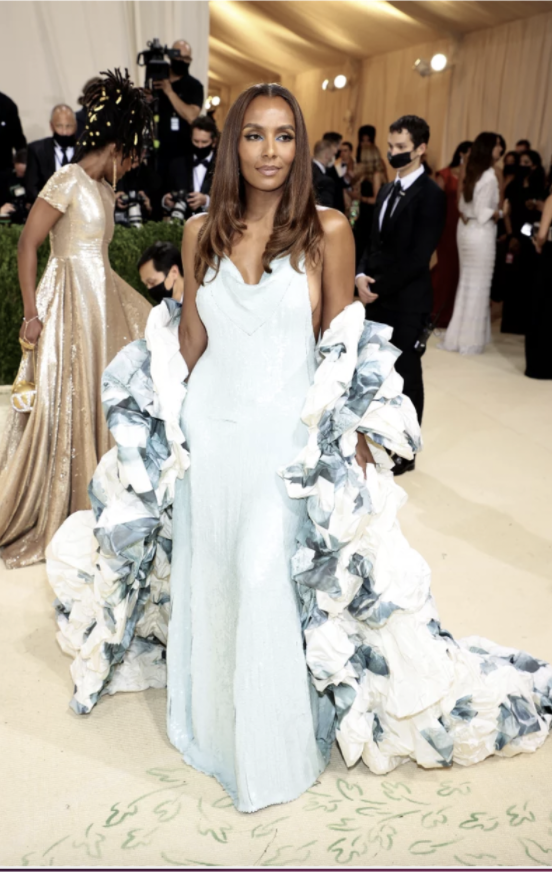 Janet Mock, wearing “Valentino Haute Couture,” appears to be channeling the Alaska state flower, “Alpine Forget Me Not,” though it has not been confirmed. A loosely fitted, sequin baby blue gown with a ruffled coat was a gentle approach to American independence. The blue and white represent America’s colors. Usually, Mock goes for something more dramatic, so this look was a change of pace for her. 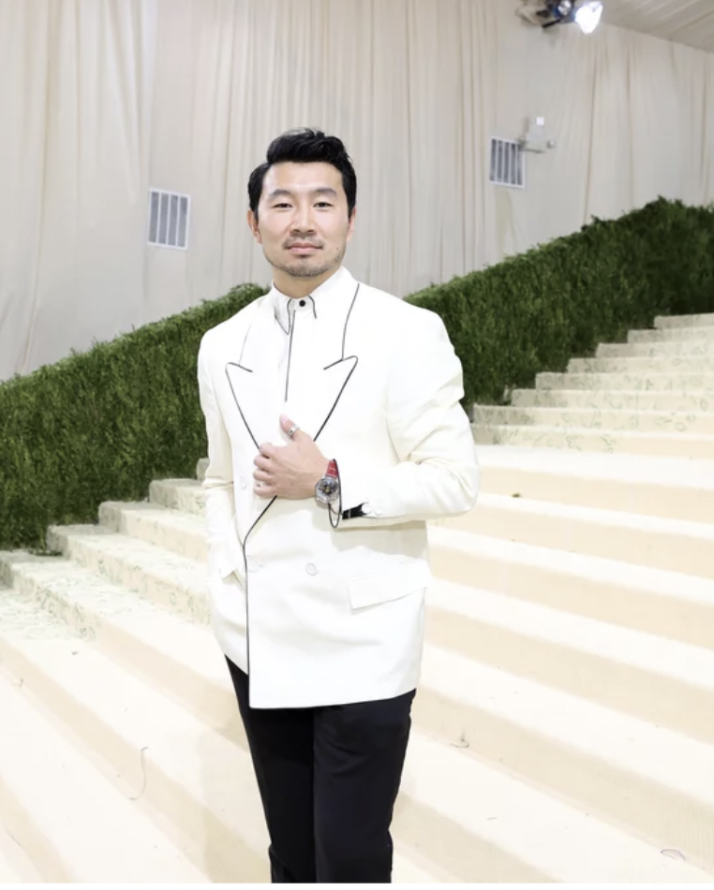 Simu Liu is wearing a white and black suit from Fendi. Met Gala ‘21 is his first gala. Liu showcased his interpretation of a glammed waiter. Simu Liu was one of the few men who wore a suit color other than black. Simu attended the event shortly after his new Marvel movie “Shang-Chi and the Legend of the Ten Rings” premiered. 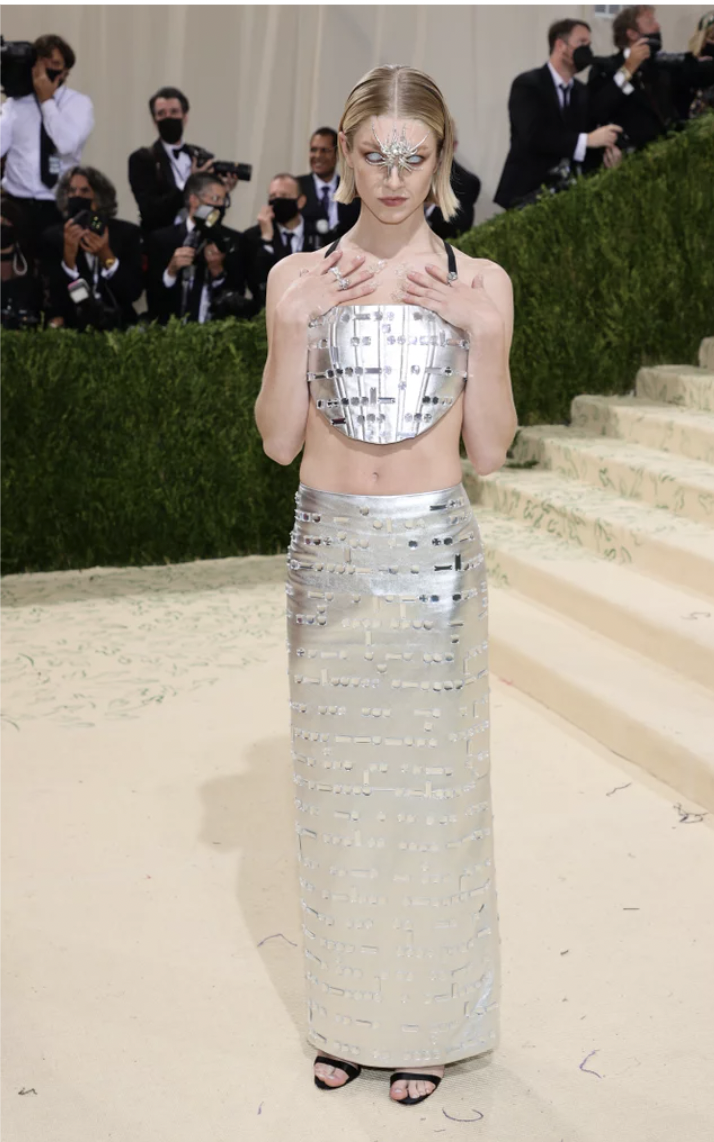 Hunter Schafer is wearing Prada to this year’s Met Gala. Hunter appears to be channeling a UFO or even aluminum foil, which is very American. Hunter, with creamy contacts and a galactic facepiece,nails the Area 51 look. Schafer’s galactic nature extends to her nails. She appears to sport water droplets on her fingertips. Schafer also wears a short and sleek bob and open-toed heels. 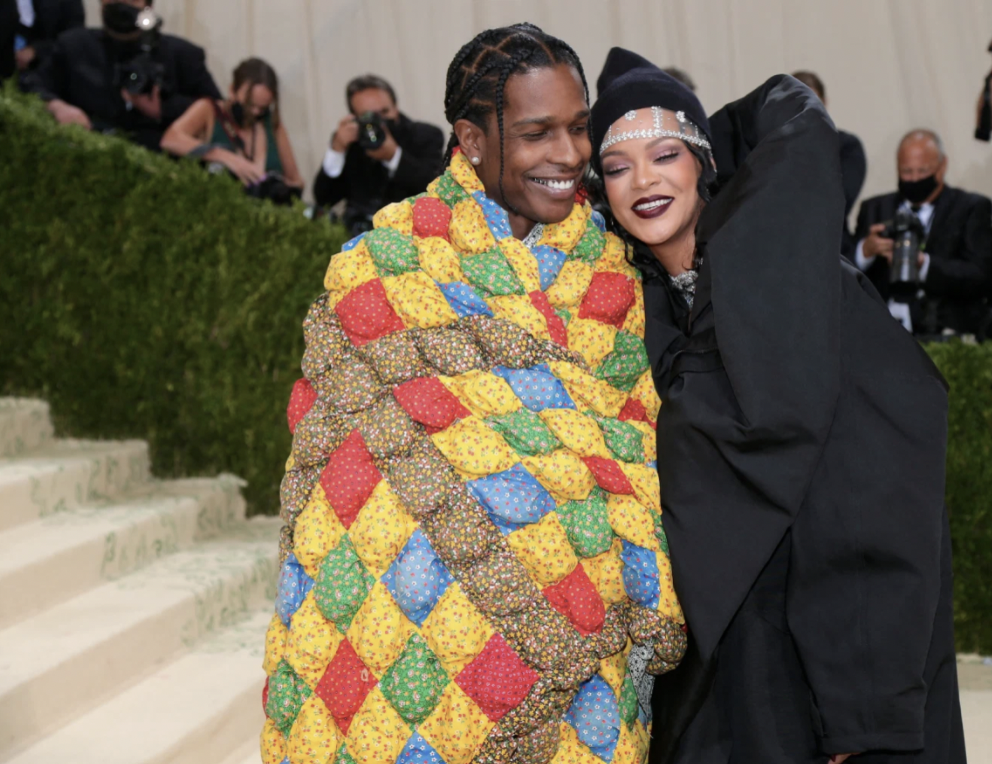 A$AP Rocky took a colorful approach to this year’s theme, wearing a colorful quilted outfit by ERL. Rocky also revealed a lux suit and tie underneath his “coat of many colors.” A$AP’s look contributes to the Gala’s theme with its unique style and vibrant colors. I am sure that you could spot Rocky a mile away. But the best part of his outfit was making his official debut with girlfriend Rihanna, who appears to have the luxury to  wear  a hoodie. 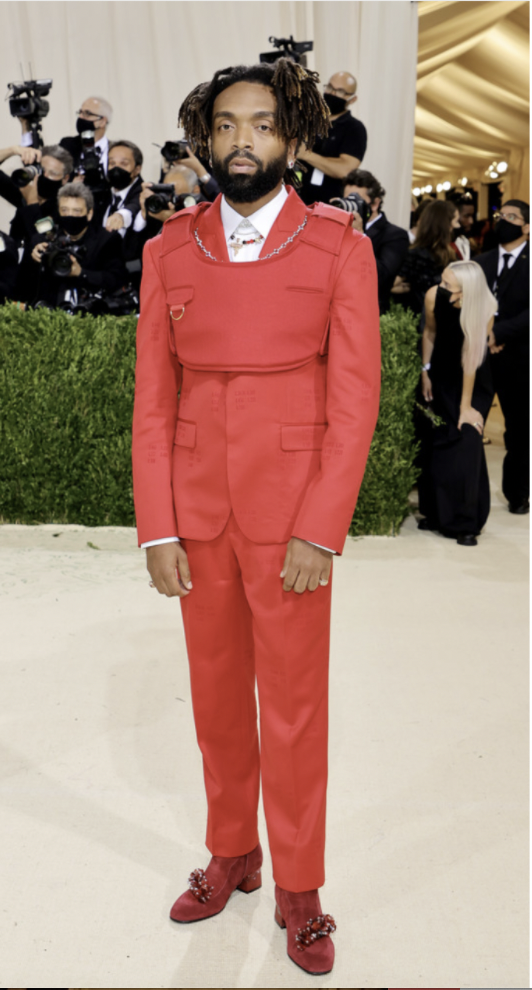 Pyer Moss designer Kerby Jean-Raymond attended this year’s Met Gala in a near monochromatic suit, paired with a red vest and red heeled boots. Raymond also wore a Pyer Moss look. This is quite a statement since Raymond was one of the few men at the Gala to wear color. The color red symbolizes  American culture as one of the dominant colors on the U.S. flag. Kerby Jean-Raymond wore a deep red, black, and gold beaded necklace with a gold cross charm. He also sported other eye-catching jewelry pieces such as ruby and silver earrings. 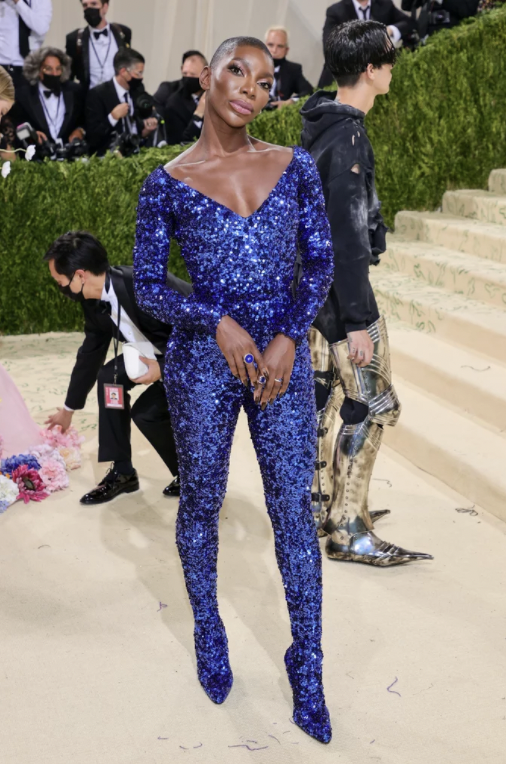 Michaela Coel, recent Emmy winner, stunned at the Gala in a deep blue sequin jumpsuit from Balenciaga. This was Coel’s first Met Gala, and she did not disappoint. The v-cut jumpsuit also connected to her boots, definitely matches the theme. Michaela could easily be creating a modern disco look. Either way, her sparkles and red carpet attitude made her look all the better. I would absolutely rock this.

Justin Bieber and his wife Hailey showcased an interesting perspective at the Met Gala this year. Bieber wore oversized, wide-leg trousers, a sleek black suit, and a white shirt, accompanied by custom Air Force 1’s. Bieber’s wide-leg trousers are a throwback to the style in the late ’90s and early 2000s. The interpretation of a classic suit and tie was a fresh take on the carpet. This was also the Bieber’s first Met Gala as a married couple. 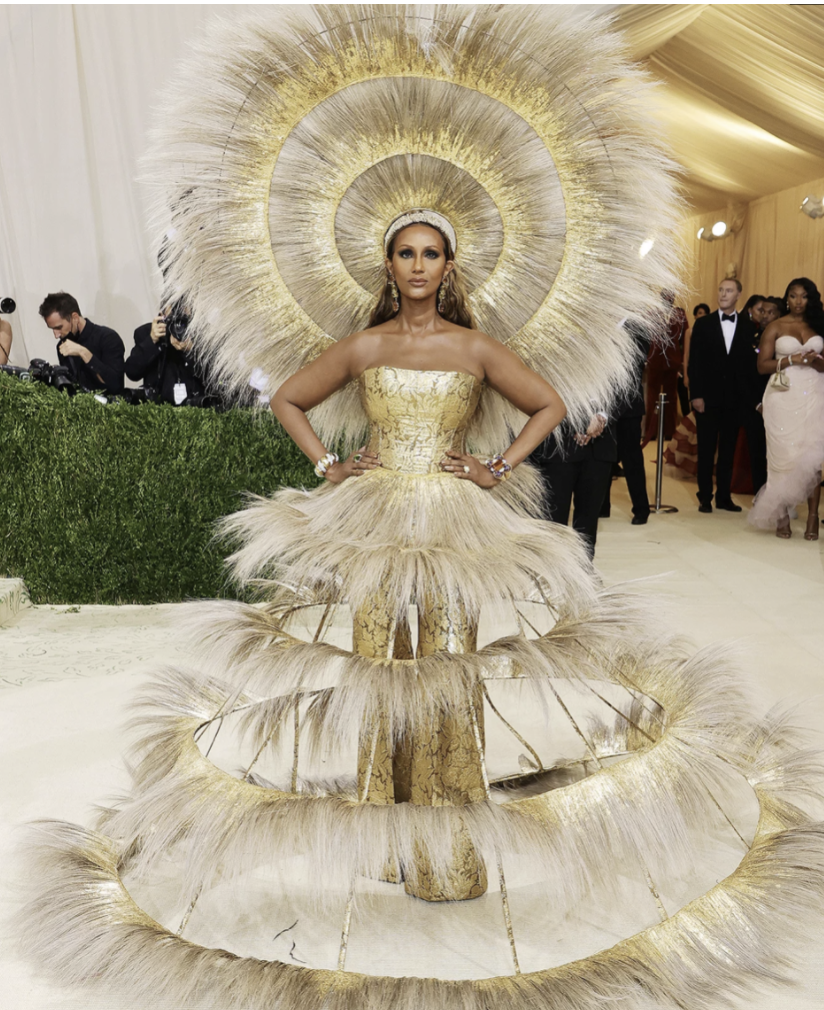 Iman channeled a sun-goddess for this year’s trip to the Gala. Wearing Dolce and Gabbana x Harris Reed, her feathered look was golden, to put it frankly. A golden yellow snakeskin romper underneath a display of golden flakes and feathers. The extravagant headpiece was a direct reflection of the theme. The shimmering nature of her outfit extended to her body shimmer. The sun, which propels everything, was definitely in attendance through Iman.

Trinitee Stokes is an actress best known from starring on Disney Channel’s live action series “K.C. Undercover,” for 3 seasons. Stokes starred as Judy, a no-nonsense tween, and youngest child in the Cooper family who was actually a sophisticated humanoid robot. She brought sass, attitude and energy to screens every week. As a quadruple threat with exceptional talents in singing, dancing, acting and fashion design, Stokes is one of young Hollywood’s most heralded stars as she is constantly sought after for international commercials and guest star opportunities. Born in Jackson, Mississippi, Stokes discovered her calling very early in the arts. She joined her mother’s stage production at church and in the local community. At just the age of 3, she was already taking direction, citing lines and understanding the technicalities of production. Trinitee is a quadruple threat with exceptional talents in singing, dancing, acting and fashion design. Stokes’ recently recurred on ABC’s Mixedish and Disney Channel’s Coop & Cami Asks the World, host of her own Podcast “Time Out with Trinitee”, and former host for the LIVE version of Disney’s Quizney game show. Additional on-screen roles include Netflix’s “Dear White People”, TBS’ “Teachers”, FX “Snowfall” produced by John Singleton, All About the Washington’s, as well as a voiceover role on the iconic Dr. McStuffins. As if that is not enough, this tween landed a book deal with Zondervan Publishing. Trinitee’s award-winning book, Bold & Blessed: How to Stay True to Yourself and StandOut from the Crowd was recently released. Angela Bassett penned the foreword. Trinitee has empowered thousands of kids on school tours and has served as keynote speaker for several events. Trinitee is also the new Global Ambassador for “Read Across Africa” where she promotes literacy and raises funds to ensure that Kenyan kids have access to books. She has traveled to Kenya where she spoke to 65 nationalities. Recently, Trinitee made history at age fourteen to become the youngest student ever admitted to Emerson College in Boston, MA where she will major in Political Communication and Public Diplomacy. At just the age of fifteen, Trinitee has become a tastemaker and role model for others in her generation and beyond. The young star resides in Los Angeles with her parents and dog Ginger France. When she is not in front of the camera she enjoys politics, volunteering, reading, traveling, and shopping. @triniteestokes
Similar Reads👯‍♀️

Experiences
Snail Mail: Why You Should Start Sending Handwritten Letters to the People You Love
Read more →

Money
5 Great Birthday Gift Ideas (and how to think of them)
Read more →
Good stuff only!